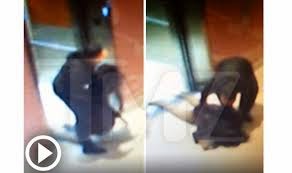 I have held off writing about the latest NFL Black thuggery for over a week now.  I always do when I fear writing about something laden with so many complexities.  I fear I'll meander and fail to write a cogent synopsis of what I'm seeing out there.

First of all, let's look at where all the women beaters are coming from.  Are you even surprised that it comes from the same class of people that have been pampered by both government and society?  Our football jocks come primarily from the same thuggery as Chicago's south side, or Atlanta, or Baltimore or Detroit, or Cleveland, or Ferguson,  Missouri...the very jerks whose heinous behavior is ignored by Barry and Jessie and Al.  Except, the thugs who can play football are pampered to an even greater extent.

From the time they step on a high school football field, teachers and school administrators, but especially football coaches, will fall over themselves smooching and kissing thug ass if it means a winning season.  I'm not even going to laundry list the long list of college thugs who somehow managed to play four years of college without gaining the ability to read, write or speak proper English.  And, because they can carry or throw a football, or layout a 300 pound tackle, they have been known to get away with assault, participating in bar brawls, and raping more than one co-ed on campus and graduate to the good old NFL.

And the NFL is about one thing; money...billions of it.  So, as long as they can cover up a player's misdeeds, as long as no one finds out, everything is just hunky dory.  Stop to consider the NFL draft.
How is draft day any different than an 18th century slave auction?  "Here's Mohammed Jones, folks...weighs in at 350 pounds, runs the 60 in 6.6 seconds and can free lift 400 pounds!".  Cleveland takes him in the 1st round!  Thug after thug dons the hat of the team that drafts him and gets a big hug from the commissioner and all of the old crimes are long forgotten.  My god, the only thing missing is to strip em down and grease their Black bodies down and parade them out their to the slave  buyers!

And because neither the NFL, or the players own union cares not a whit for anything but money, those Black jocks are never given a class in personal financial management and (absolutely true), more than 80 percent of them are dead broke within five years, whether still playing or not.

But then Ray Rice just happened to be caught on a security camera knocking his fiance out cold.  And TMZ got the video and put it all out there....but not before a policeman involved in the investigation sent a copy of the tape to the NFL where it was ignored.  So America watched...and cringed..and shouted out in anger....the anger mushrooming by the "war on women" army who just knew all men where like that anyway, right?

So now the NFL cares...because Nike is threatening to pull ads, and Pepsi is threatening to cancel a $2 billion dollar contract...and somebody in Congress might decide that the NFL is really a business and should be taxed accordingly.

And you know what?  One good thing and one bad thing is finally coming of this...and it is all the same thing.  After the culture of Black thuggery has led to thousands of rapes, robberies, mob-robs and murders, all executed while nearly all of America stood by and didn't give much of a shit, the ugly face of that thuggery is emerging front and center of "America's Game", the past time that has always glorified violence!  And it is striking at the very heart of what most really care about; money!

And now a few of those Black thugs are finally being regarded as the pariah they really are.  And will Americans finally rise up and demand a change in the violent Black culture?  Don't bet on it...while money will insist that the NFL clean up their act, there's simply no profit in cleaning up the ghettos.

Wow, I would have thought you a football fan! Where are we supposed to get our gladiators from? Yes, another 100% agreement from me! Same thing is true with basketball and probably every other sport. Our college football coach makes a paltry Five Million per year,
It is about the money, that's for sure!

Good morning, Jerry! I love football! Just don't care for some of the unnecessary violence and really don't like the glorification of thugs (same with rap and hip-hop heroes).

Yeah, we got some of those $5 million dollar coaches down here too. Madness!

I stopped watching football when they went on strike for more money, baseball too.If you look back at the game objectively when is was a predominately white league there was little to no violence outside the on field version.TAX the nfl at the proper rate + 10%. Just a note:How come you never see an ongoing problem of any kind in any type of motorsports? Maybe it is because the drivers/riders would do their chosen sport for free or almost free.

Off topic here, but I've noticed that your entire article is appearing in my email again. Just an FYI! Oh, and I love football myself; just not the thuggery or drama. :(

Hi Carol, when I was truncated my blog I didn't see any real change in the numbers of readers who logged in to read the blog so I haven't been making a big effort to truncate anymore. Might start again at a later date.

BTW, we didn't get any significant rain from this supposedly big second storm..heard it was moving north, then East, so hope you guys out that way didn't get it too bad. Monsoon season should be officially over so let's hope for some nice gentle winter rains.

Oh, OK. Yes, the 2nd storm didn't do much out here. 1 heavy shower and not much else!