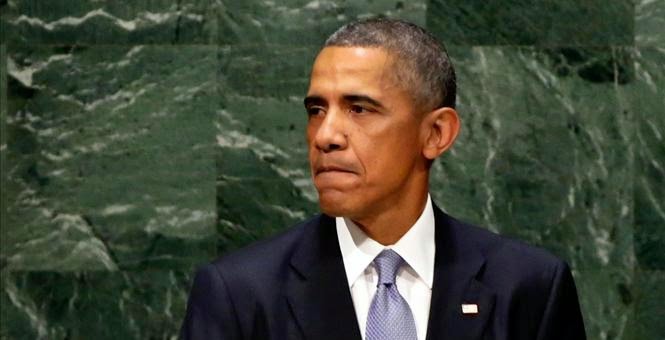 Barack Hussein Obama went to the U.N. yesterday.  He was on his second mammoth apology tour, lamenting that America is such a sad and lousy country.  The U.N. delegates, sitting in padded chaises paid for by American taxpayers, squirmed in glee as the Anointed One tore down our country.

The first thing Barry talked about was how badly we are messing up the environment...then he promised to do better even if it meant destroying the American economy.  No where in his speech did Barry target the two biggest world polluters, India and China.

Then Emperor Obama went to great lengths to say that those terrorists who are beheading westerners and who brought down the Twin Towers aren't Muslims...just terrorists.  While totally ignoring a thousand years of Islamic savagery, Barack says Muslims would never embrace violence of any kind.  Barry even ventured to praise an Islamic radical so dangerous that his own State Department bars the guy from traveling to America.  Guess Barry forgot to tell State that the Muslim thug was cool.

Finally, Barack drifted off into something even more bizarre.  He cited the thug, Michael Brown, as America's failure.  Elevating the gangsta robbing thug to martyr status was a bit much even for Obama.  Maybe Eric Holder threatened to resign if Barry didn't say something really nice about Brown.

Maybe Barry is right.  Maybe that QT store clerk should have realized that Michael Brown was entitled to free cigars..and anything else he wanted for that matter.  Maybe the $15,000 per year that taxpayers shelled out for Brown's schooling just wasn't good enough.  And maybe the hundred million dollar special program Brown took to qualify for a high school diploma wasn't enough, nor were the Pell grants and minority preference Brown was given to attend his intended trade school.

But to bring Brown up before the United Nations General Assembly was just wacko...kinda like your spouse discussing his morning bowel movement at the breakfast table.

But that's Barry for you...airing dirty laundry and Starbucks salutes.

If obummer hates it here soo much he should leave and take all of his kind with him.He is such a piece of shit.

Craig, his behavior and his thought processes just continue to get more bizarre.

I keep saying Obama are THE biggest racists in American History. Turns out I was right as usual!

1.The Commander in Chief is not a member of the military nor is Commander
in Chief a military rank. 4 star general and Fleet Admiral would be the
highest rank in the military (I could be wrong, I was army, not really
familiar with naval rank).

Yes, the President, whoever it is, should respect the because the military
has to salute them, those salutes should be acknowledged with respect.
This doesn't always happen, with any president, and it not happening is
not some great conspiracy that shows that president "hates" the
military. It proves how much of a racist you scumbags are..Was your
outrage and disgust the same when previous president's held their dogs
in the same manner? hahahaha...I keep forgetting, it's because Bush was
White, so it's okay.

2. He did not bash Israel or the Jews....In
fact he hardly mentioned them......This was a case for getting more
Muslims country to go against ISIS...If we can get more Muslims
countries to serve America against Terrorist groups, and really have
them have a serious deep moral and soul searching look into themselves,
then doesn't that serve the big picture anyways?

3. And still more Zombie Lies. Memes are created by them, debunked not only by partisans, but by independent organizations, and yet the throngs of mindless idiots continue to operate as if they are simply uttering an accepted truth. There is, was no 'apology tour',

There is plenty to criticize and plenty that can be improved, but crap like 'apology tours', or 'Obama hates America', or 'he has no affinity to freedom' or Alinksy, socialism, creeping sharia, it's all never ending sewage, that despite debunking, continues to spill out leaving an endless mess for reasonable people to clean up...and nothing gets done. All created as buzz words and covering that fact they can't stand having a Black Man run the world.

American issue, mybutt. This is nothing but a Right-wing racist issue to attack the Black man in office!

All
these lies, created by racists, bigots, black-hating extremists who
hate having a Black man in office! if Obama is a Marxist then this must
be a Marxist country b/c he won two elections quite handily, didn’t he?

I never heard half the conspiracy theories and disrespect out of the left during the bush years.

And
this says nothing about his personal conduct or his family. How many
times did you hear the left talk about bushes vacations. Practically
zero but it's a topic brought up almost daily in conservative media. How
often did you hear liberals talking badly about Mrs bush, basically
never. But how many conservatives do I hear talk about how much Michelle
Obama looks like a man or calling her moochelle or any number of other
disrespectful things. All the time.

Some seem to have an irrational hatred of the man who is their very own President! Mostly because he’s black!

Calling the POTUS a POS, a thug and a fraud IS THE usual calling call for you right-wing racists and bigots like you!

Has anyone wondered why a liberal has to write at "book length" to express one simple thought?

WTF? Are they trying to convince themselves? Wanna talk hate? Listen to the anger here, boys and girls.

I never respond to these types because it is all too clear that they are too far gone to reason with. Totally brain dead.

By the way, I just googled "SoulStraw3"...he's all over the internet playing the race card and ranting...hundreds of entries. Sorry guys....up go my filters..go ahead and comment but I'll screen them before they are published.

I will never allow my blog to be used by a professional and serial "race card" player to hi-jack my blog.