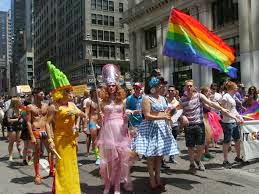 There are Gay Pride parades in every city of a decent size all over America these days.  Not good enough, says Gays...we need to be smooching and strutting and half naked in every parade in America, year around.

Last year New York City at first refused to allow gays to infiltrate the annual St. Patrick's Day parade in that city.  The Irish had a problem with issue oriented groups hi-jacking what, for a hundred years, was simply a celebration of Irish heritage.

Well, the LGBT organizations took the issue to court.  One of those grand liberal courts demanded the St. Patrick's parade folks allow gays in their parade or an injunction would be issued and the parade would not be allowed to take place.  So the rainbow folks strutted their stuff and the folks in green were shunted into the background.

Happily for the "queer in the rear" folks New York now has the most liberal Mayor to ever head up a municipal government.  He has laid out a huge welcome mat to gays for this year's St. Patrick's Day parade so you can expect a grand "in your face" turnout for a parade that used to just be an excuse to celebrate an Irish heritage and drink a little green beer.

I can see this trend spreading quickly.  When Easter comes around we'll have Peter Rabbit shunted to the sidelines in favor or feminine men who adore wearing evening gowns.  Instead of tossing out Easter candy our LGBT friends will hurl condoms to the masses.

How about the 4h of July?  Shall we shove the patriotism stuff out and have gays lugging phallic like huge firecrackers down main street, moans of passion evident as the tip of the phallic firecracker emits sparks of fire out the tip?

Maybe the LGBT crowd can get all those Snoopy and Bart Simpson balloons cancelled in favor of huge inflatable condoms for the Macy's Thanksgiving Day Parade!

The possibilities are endless!  How about allowing the LGBT crowd manage the Hollywood Christmas Parade?  And, oh how magnificent they would be in the Rose Parade!

To date, there have been no special parade requests for the heterosexual community to be represented in any of our grand parades.  Our homeless vets aren't asking to march nor have any of our traditional organizations sought to crowd to the front of the line and hog the attention for a parade not intended for them.

I would never want to participate in anything that I knew I had to 'force' my way into. But, what does my opinion matter?!

I agree, Carol. But of course you know they do it because of a much larger social agenda...it is not a personal thing for them.

Maybe it is time the rest of us hijack the carpet muncher fudge packer parades, you know: do unto others as they have done unto you.