A Place To Lay Their Head 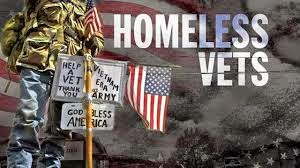 About five years ago some of our wiser politicians in the city of Phoenix decided on doing something simple for a change.  No grand expensive programs, no bureaucracy established to manage it...just doing some good where they might.

Until the Phoenix program began, veterans made up 12% of the homeless population.  That's down to 9% today as Phoenix has worked some magic.  Even the Arizona-hating White House acknowledges that this city is the first in the nation to zero out veteran homelessness.

It happened because the  Mayor and a few good people decided that, if they thought smart, and worked smart, they could get their homeless vets off the streets and on a trajectory for a better life.

So they cobbled together a little money from the feds, a little money from the state, and personal donations from the local citizenry and began to build some modest little apartments that the vets might live in.  They appropriately called the housing complex A"Victory Place".  And even as the walls were going up on those little apartments and converted older motels, they worked with veterans groups to figure out how to help the city's homeless vets.

A group of volunteers called The Madison Street Veterans, vets themselves, began combing through homeless shelters and soup kitchen lines and culling out a few of the lost and forgotten...some of them wearing Vietnam unit hats and carrying their "fruit salad" medals in the bottom of an old duffel bag.  One veteran, upon being asked about the purple heart medal he wore pinned to his left chest pocket, unbuttoned his shirt to show the scars where an AK-47 round passed within an inch of his heart.

"Don't lay a lot of rules on them", said one vet.  "These guys have been living on park benches and under trees so don't make the mistake of assuming the transition will be easy".  "Have patience", said another "these guys are homeless for a reason; mental problems, or drug or alcohol abuse...don't expect too much at first".

And so the powers that be built the little homes for vets, and they didn't demand that they give up alcohol, or drugs, or force them to take a job.  The main objective was to get them off the street and worry about the rest of it later.

Now anyone who has ever been homeless will tell you that it is nigh impossible to hold down a job and live a normal life when you can't regularly eat, or bathe, and don't have a phone, or even an address.

So Phoenix gave them an address..and more importantly, a home.  They could now apply for food stamps and they could now sleep in a thrift shop bed, but the bed was safe and warm, and the vet finally began to believe in himself, in his future...just a little at first, but enough.

After a time, after regularly being able to put food in their bellies, after getting an uneventful night of rest, those vets began wandering by the job boards posted around their apartment complex.  Soon their level of trust became such that they could ask for the assistance of a volunteer "vet navigator", vets themselves, human "compasses" who could point vets in the right direction and the homeless vets began to get jobs and re-connect with families who had long ago given up on them.   Happily, many of them asked for, and received help to kick their addictions.

No, all is not roses with this story.  Nothing in real life is.  When program volunteers began going around to the parks and searching under highway underpasses to tell their story, to talk about the program, there was skepticism and distrust.  At one time or another a vet has been wrung through the bureaucratic wringer and said "never again".  But, over time, there were just enough "good stories" coming back to these homeless vets..stories about real people caring about their plight.  Then, slowly, the vets began to file in and accept the offer of a home.

So, in January of this year the city of Phoenix had managed to house every single homeless vet that wants a home.  Yes, there were a few stragglers who could not be persuaded...but those who want a home, have one.  Amazingly, drug addictions, and alcohol addictions have been licked at far higher rates among these vets than the general populace.  The "retention" rate in these vet homes is an amazing 94%, a few going back to the streets, but happily, many redeemed sufficiently to leave and go back to their families.

I guess the lesson here is that, you don't have to start a big expensive program (the federal government spends billions creating bureaucracies to try and do the same thing..and fail), you don't have to put up a big government building, and hire a small army of bureaucrats, and siphon off huge amounts of taxpayer dollars to get something good done.  If the heart is in the right place, if the goal is to truly help people, and not do it for political favor, good things can happen.

But perhaps the greatest lesson learned here is that, no matter how lost a person can be, no matter what his burdens, no matter his transgressions, a person, and a life can still be saved if enough people really care.

Great program you have in Phoenix. Were the Vets also asked to help with the construction and remodeling? Just curious. Nice read to start the week, thanks.

I do know that vet organizations were involved in getting the program going even before ground was broken.

Nice for Phoenix and the Vets living there. It is the very modest least that we should be doing. Maybe other cities could pick up this ball? When you require someone to fight and die for you, it leaves us forever in their debt.

Jerry, I understand the state of Utah is now trying to do the same thing, statewide, that Phoenix has done.

Damn fine story. So good to hear that somebody can get it right for a change without sucking off a huge amount of money for overhead (Wounded Warriors come to mind). I hope other states and cities will learn from Phoenix.

Thanks Bluemax..I hope so too.