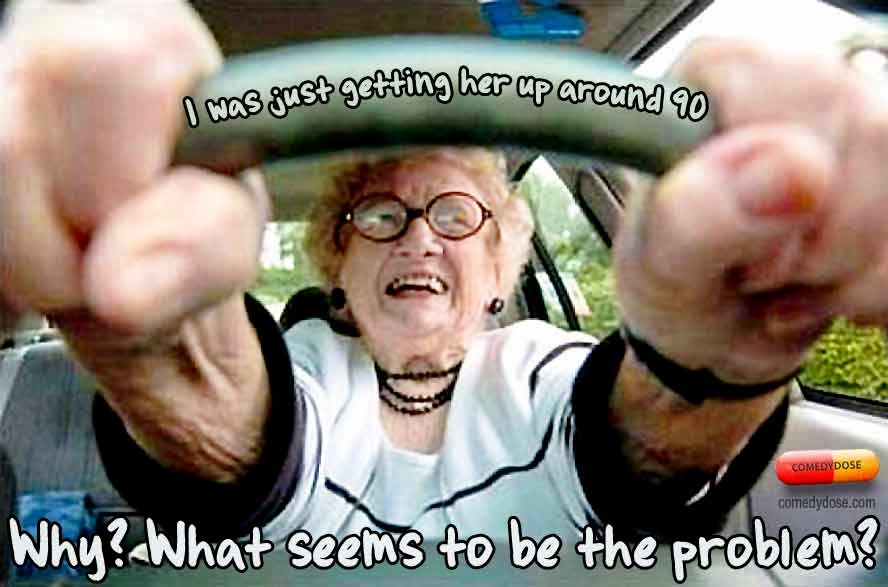 This week one of the insurance companies came out with their annual survey on most safe drivers in America.  Phoenix came out in the top 20, and after I went and cleaned myself up, I thought about how bad the other places must be.

Well, I was all ready to get real snarky about this, but then I googled the subject and found out there are about 20 of these surveys and the various cities all come out different as to where it's safest.  One bit of consistency was those cities who appeared on the "worst driver" list on every single survey.  Boston, New York City, Houston, Baltimore and Atlanta all appeared on the worst list.  For example, Bostonians average an accident every 4 years as compared to Phoenix where the average is one accident per ten years.

But there were all kinds of criteria among the various surveys.  One survey identified the most polite drivers while one simply gauged the champs of "road rage."

Getting back to Phoenix; most folks around here will tell you that they absolutely hate getting on the road between October and April, the period when those two million mid-west snowbirds show up in Arizona.  Most troubling is those midwesterners' tendency to get over in the fast lane and drive 44 in a 65 MPH zone....drives the local commuters bonkers.  Plus, it simply isn't pleasant to see an extra million vehicles on the road when you're used to a fairly consistent and steady traffic flow.

And don't for a minute think senior citizens don't contribute as much, or more of those traffic headaches.  Here in Sun City we have folks who don't think a lack of peripheral vision, or cataracts, or periodic dementia is any reason to surrender your driver's license.  Thus, once a month or so we tragically find an old person that has driven off from home and later found in the desert where they have driven off, forgot where they were, or how to get home, and then end up dying from thirst and dehydrated as a prune when finally discovered.

When they are lucky enough to be lost in an urban center you will often find them immobile at a stop light, unable to get their mind back on track and move on.  On more than one occasion I have encountered old folks like that; sitting at a green light or a stop sign, long after the signal to go.  Once, when I was not in the most tolerant of moods, I came across an old lady who didn't respond to the green light.  After about 30 seconds I sounded my horn behind her and she literally leaped out of her seat, threw her arms in the air and began screaming.  Scared the hell out of me and I vowed never again to instigate a heart attack.  I now just whip into the other lane for a moment and go around them...much too dangerous to put a scare into them.

Also a mite troubling is that folks here in Sun City either go 15 or 60..there seems to be no in-between for most of them...either they are speed heads or poke alongs.  Try driving in that every day and see if you don't lose your temper once in awhile.

And did I mention the stunt drivers?  At least once a month we have an old codger hit the gas instead of the brakes and then plow into the front glass of a local shop.  It's kind of par for the course around here.  One morning, when my wife still owned her shop, I got a call from her and she was really, really shaken up.  Seems that one of her elderly clients jumped the curb at 40mph and crashed through the UPS store next door.  And the elderly driver missed my wife's shop only because she lost control of the steering wheel and veered right into the next shop.  The poor UPS guy was found in the back of the shop with five rows of stationary and the entire service counter was shoved back thirty feet.  He was unhurt and needed only a change of underwear.

So I think I'll just disregard all of these driver surveys.  A few months ago we averaged one driver a day (or night) entering the free way in the wrong direction, sometimes with tragic results.   I like to think crystal meth or alcohol was responsible because I don't ever want to think anyone is that stupid.

Houses are not safe here either.  We have thousands of illegal Mexicans who got their driver training on a farm, on a tractor, if at all.  If they do have a driver's license it is usually forged.  So we have enjoyed a plague of bizarre accidents here; the most recent craze being driving over train tracks, crashing through traffic barricades and ignoring those swinging red lights on the tracks.  Our spanking new metro rail has not escaped that same fate dozens of times.  But it is when an illegal, with no driving experience, sucks down a 12-pack of Dos Equis when the fun really starts.  We locals are entertained weekly by those rich cultural folks from the south plowing right into homes and taking half of the home out.  Most times the idiots are stunned long enough for the cops to come get them but sometimes the police and homeowner just stand there wide-eyed as a low rider Honda Accord, with glass packs, is sitting unconcerned in their living room.

That's all the news that is the news!  Safe driving folks!

Try driving in northern Kalifornia between the illegals and the incompetents and the elderly it can frustrating to say the least. I do my best to laugh and keep my head on a swivel.