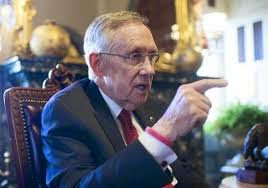 Well, Harry Reid, in another attempt to recruit more women in defense of the Republicans' "war on women" again trotted out the Paycheck Fairness Act this week.  If you have an IQ below 70 stop reading now.

You see, the Paycheck Fairness Act is just a ruse...it has nothing to do with raising the salaries of women.  Instead it is the Debbie "Wasserman Test" Schultz equivalent of "republicans grabbing women by the hair and jerking them back to the 1950's.

I read the proposed bill.  You should too.  Go to Senate.gov and read what it was REALLY about.  First, it levied still another burden on America's business people.  It would require businesses to explain, employee by employee, why one person was being paid at a different rate than another.  Secondly, the bill would force all business owners to publicly publish every employee's salary.  (If you like this I would like you to send me a copy of all your credit card receipts, your bank balances, what you spend your money on, and why little Johnny got a bigger present than little Janey on their respective birthdays...and why you paid one plumber x amount and a different amount for the local handyman)

Businesses have every right to negotiate salary with their employees.  Every worker is different, with differing talents and their work has a different impact on the success of the business, depending on talent and quality of effort.

Harry's bill would also demand that the secretary who does the payroll at your local fire department get equal pay with the firefighter who walks into a burning inferno to save a life.  Or that the records clerk in the Police Department get the same pay as the street cop.  Sorry, that only works in the military and even the military has special pay for hazardous duty.

Look, Harry knew his bill would not pass.  But he chose to spend the few short weeks in this pre-election session to throw out nonsense instead of the 490 House bills sitting on his desk for a Senate vote.  (Who's responsible for the gridlock, really?).  But this gives Harry and his liberal army a little more mush to feed to the Kool-Aid crowd in hopes of getting them to turn out to the polls in November.

I am all for equality in all aspects of the time we spend living.Some people are better than others at different aspects of anything and should be compensated accordingly.Harry's idiotic ideas continue to amaze me.

Gotta love ol Harry. Both he and Pelosi should have been put out to pasture long ago, but the Liberidiots keep bringing them back so they can spew they're doomsday and inequality messages. I just wonder how these two can look themselves in the mirror in the morning and say "I'm on the path to Heaven" because the Devil has first dibs on these two. Maybe they should read the Bible just once to see that deceit and lying doesn't get you to the higher place. Eventually, they'll get what they deserve....