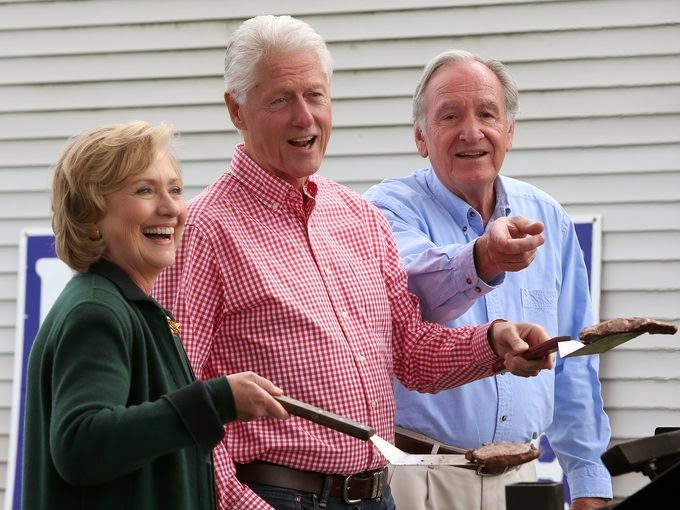 Last weekend Hillary Clinton flew down to Iowa to attend Senator Tom Harkin's 37th annual steak fry.  Just as at tax time you pay five times what your government is worth, old Tom hawks steaks and charges five times their worth for the privilege of sitting with the latest "liberal darling" with an eye on the White House.

So Hillary, though she says she's not running, was there.  All eyes were on her as she gnawed on a steak bone and chewed a bit on her chances of winning the Presidency in 2016.

There's been a bit of froth from the political media pundits of late suggesting that Hillary might not run.  Don't you believe it.  Hillary is the most cut throat and ambitious politician to come along in a long, long time.  She covets that office as badly as Slick Willie covets his bimbos.

And why shouldn't she?  Every poll taken shows Hillary will get 70% of the woman vote, nearly all the Dems and a healthy number of Independents.  You see, many women see Hillary as the chance to mount the "grand revenge" on men.  No, they don't for a minute believe Debbie "Wasserman Test" Schultz' assertion that Republicans are grabbing women by the hair and dragging them back to the fifties...but they do believe they'll lose their right to "birth control by abortion" and their free Obamacare birth control pills if Republicans win the Presidency.

Note to women:  If you're gonna continue to be idiotic, Kool-Aid sipping dumb cunts that can't see an issue beyond your vagina then I'm gonna time travel back and tell my great grandpa to vote against ratifying the 19th Amendment because these 21st century women are bat shit crazy!

Many American women admire Hillary because she IS as ruthless as any male politician.  Beneath those peach colored pant suits are a set of metaphorical testicles that few women have.  And even women with the best intentions would like nothing more than to see Hillary in the Oval Office.  It's their comeuppance from the "suppressive 50's" when women were to be seen and not heard.

Indeed, among the Democratic field, there are a few male politicians who are thinking about running...most of them were neutered long ago by the liberal agenda and present no threat at all.  Even Mad Joe Biden stands little chance of co-opting the party's nomination once Hillary declares her candidacy.

So the Republicans better watch their step.  There had better not be one loose lip uttering about women closing their legs to prevent rape, or any mention of the value of a stay at home mom, or eliminating birth control under Obamacare.  They'll need to draw up a laundry list of all of Hillary's many failings...from being fired during the Watergate trials to to Benghazi, and everything in between.  They need to remind the American people that Hillary marched in lock step with Barack Hussein Obama throughout five years of his term.

Speaking of Barry, Hillary will try mightily to distance herself from Barry's bumblings...she's already been heard doing that of late.  Truth be known, Bill and Hillary despise Obama for snatching the Presidential crown from her in 2008...she had already been picking out the curtains for the Oval Office when the community organizer came along and sold the American people the most phony bill of goods ever in our history.

You can be sure that Hillary has got a couple of suitcases already stuffed full of her pastel pantsuits...just waiting to hit the road to again sell the American people damaged goods.  Meantime Hillary was seen gnawing on the steak bone, fangs fully sharpened for the campaign ahead.
Posted by A Modest Scribler at 2:00 AM

Can't
Understand
Normal
Thinking
The word that describes most who want to see hillary as President.

Thanks for the acronym, Craig. I should have reminded readers that I am all for a woman President...have written about it several times...just not Hillary and her ilk.

Nikki Haley, Kelly Ayotte, Susana Martinez, lots of talented women who can think and see above their vagina.


Heap all the derision on her you want: Take a good look at your next President. Doubt that? Look at who/what groups will vote for her: Parasitic government slugs, minorities (except Asians), women, students, 18-25 year olds, union members, older white people suffering from guilt over sexism/racism/fill-in-the-blank ism (unjustified), Dims of every flavor, atheists, feminists, lesbians, and "moderates" who think it would be really cool to elect a woman... With between 1/3 and 1/2 of the states solidly Dim (with a LOT of electoral college votes in those states), beating Hillary will be an uphill fight that will probably fail. I don't like it, but it's coming next November.

yep, Randy...my point exactly..that's why I said she'll get 70 percent of the women vote.

She'd have to slip on a dump truck full of banana peels not to win in 2016.

You are right 1000%! This is the sad next step down the ladder into the shit pile! Our next great idiotic attempt at social engineering. I dread the next November morning just like the last November morning when the negro won. Being American means nothing any more, especially responsible!

Where you been, Ken? I wrote about your damn Polaroid movie and you didn't even read the damn thing...:)