"America In The Morning" 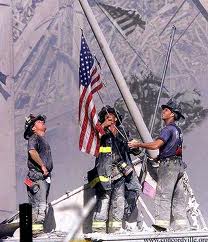 America awakened that sunny September morning to azure blue skies and with an innocence that would dissolve in the shadows of that very same evening.  But that was later.  The day began with an unfolding of America's joyous embracing of life...and of carrying out the business of being who we are.

New Yorkers hurried to work, no doubt with the same brusqueness and brashness that is their way.  The "melting pot" of Jews, Italians, Irish, German, Hispanic and Asian cupped hands around the familiar office coffee cup, munched on bagels, biscotti or donuts and looked out on the New York skyline from their majestic perches in the Twin Towers.  Phone calls and faxes and the electronic dance of data exchange from all over the world were already humming through the massive network of communication devices. The "water cooler" gab perhaps was of pennant races and football, perhaps of weekend soccer mom travails, or maybe just a joyous appreciation for such a fine weather day.

At about this same time Americans were exercising the ritual of boarding the commuter air chariots which would carry them home to family, to a business meeting in San Francisco or, for a little two-year old, to her first trip to Disneyland.

America elsewhere was rousing itself from Sunday night slumber; as the Sun moved east to west Americans awakened, let the dog out, plugged in the coffee pot, retrieved the morning paper, stuffed peanut butter sandwiches into school lunch boxes.  Did all these things while the white noise of morning television emanated from the living room.

Then, the first plane came; soaring incredibly low across the majestic city skyline.  Those who were watching on TV were horrified by the sight.  A terrible accident they thought.  Those inside the first tower hit were shocked beyond comprehension.  A surge of cell phone traffic occurred as those inside sought to reach out and communicate love and fear to family or friends, perhaps just to offer a last declaration of love before they died.

Stunned and speechless, Americans stood before the TV and had their worse fears confirmed as the second jet plowed into the second tower.  The horror of fire and smoke escalated to nightmare as we watched human beings leaping from the 108th floor in the last desperate attempt to escape the searing fire.

America's fear increased as news reports revealed further horror as the American Airlines jet plowed into the Pentagon and we wondered how massive was this assault on our beloved homeland.  Anxiety heightened again as we learned that other rogue human air bombs were aloft and intent on inflicting further damage and further death.

Then, in an unimaginably short time, the majestic towers shook and crumbled to the ground, bringing with it the souls of three thousand innocents, whose only crime was that they lived in America.  The ashes of steel and glass and human flesh cascaded to earth and swooped down the avenues that only minutes before had been testament to three hundreds years of American endeavor.

As in any American tragedy there are also brief glimpses of glory.  As we kept vigil on the American pulse, as we tried to comprehend the degree of American hate that could have caused all of this, we learned that, even from the ashes of ruin, there was American heroism and human nobility.  With a rousing "let's roll", a small gathering of Americans, virtually assured of their own death, were determined to prevent their plane from being more human fodder for destruction of innocents on the ground.  They chose instead to end their life's journey on a peaceful hillside in Pennsylvania.

Even as the first responders in New York came to realize that the massive edifices could not be saved, they pledged to save lives instead.  With the spirit of self-sacrifice that has always been part of the American character, these brave men and women risked and lost their lives while trying to save others.

Americans lost something on that fateful day.  We lost the sense of security and we lost the sense of innocence.  Before that day, we believed that all we had given to the world was sufficient to insure God's blessings and God's protection.  We believed that the sacrifices offered to preserve liberty, our work to feed the world's hungry, our endeavors to relieve pain and sickness to the world's helpless would always secure admiration from the world's peoples.  We were wrong.

But we also gained something on that September day, and in the days that followed.  We learned that America continues to be blessed with selfless and noble human beings who believe in the sanctity of life and the preservation of our American way of life.  We learned that hate and religious zealotry shall never defeat us.

On a personal note, I retired from the Air Force in 1989.  Following my military retirement I went to work in Saudi Arabia.  I was in the Middle East during the 1st Gulf War and endured, beside my fellow American military, Sadaam's Scuds as they thundered into Riyadh.  My work was useful as my job involved keeping American and Allied fighter jets in the skies above Iraq.   I continued working in the Middle East until the summer of 2001.  I arrived back in America two months before 9/11.  As the horrors of that morning unfolded, the old warrior spirit in me came alive and I wanted so dearly to join the fight for America, just as I had always done in Vietnam and in service in other places in the world.  I felt helpless and ineffective as I realized that I would sit on the sidelines this time.

But I was heartened to see that a new generation of young Americans were lining up at recruiting stations and raising their right hand to take the sacred oath of service and sacrifice.  These selfless and noble gestures gave me great pride in my country and a comforting assurance that our country was in good hands.

God Bless and Comfort America on this day of remembrance.
Posted by A Modest Scribler at 3:00 AM

We as a country will always show that Good triumphs over evil.

Thanks, Craig. Thanks, Jerry.

You know what? This Blog REALLY made me feel good. About my Country, my Fellow Man. Now,far it be for me to tell you what to write but I could use a pick me up once in a while. Maybe a positive Blog to temper all the negatives will do us all a little good. Needs to remind us how good we have it. Thanks for the great start to my morning. I think I'll go vacuum the floors...