World's Mightiest Leader Having A "Gas" 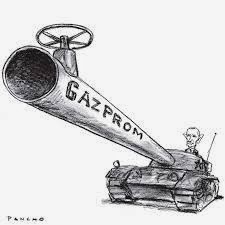 Good morning dear readers.  Well, we awake this morning, here in the the world's declining superpower, and learn that the world's strongest leader, Vladimir Putin has threatened to shut the gas off to Europe's 18 national Gasprom customers!

It goes like this:  The Ukraine, in something of a national turmoil these days (something about a Russian invasion on the eastern state of Crimea), seems unable to pay their gas bills.  So Vladimir Putin, chief customer support officer for Gasprom (and a big shareholder) has sent a letter to the 18 European nations,  who rely on Gasprom to heat their steamed snails and weinerschnitzel, telling them that if they don't fork over money to pay the Ukraine's past due gas bills, he'll spin the spigot clockwise and cut off European gas supplies.

This "dunning letter" left European leaders stunned; after all their bills are paid up, so what does Ukraine's deadbeat ways have to do with them?  Well, Vladimir, being the cunning fella he is, knows damn well someone from the West will spring for the Ukraine's gas bill because, in the entire G-7 there's not a complete set of testicles among them...and they know better than to look to Washington cause the fella occupying the White House never experienced the masculine joy of having his testicles descend and become a man.

Oh, the "man-child" at 1600 Pennsylvania Avenue will surely trot out to the Rose Garden and rattle some tin sabers; he'll announce that he just got off the phone with American Express and they've agreed to cancel Putin's "Black Card"...that'll surely teach him a thing or two.  And let's not forget that Barack has been on the phone to Peking Bank of China to borrow $4.5 billion dollars for emergency foreign aid to the Ukraine and that should cover their Gasprom's bill for a few months.  After all, we just learned a few weeks ago that the Ukraine has a direct deposit account with Gasprom and Mr. Putin gets a big cut of that as the "collection agency".

The peril of course is that China may tell Barack that he's over extended his account.  We currently owe China $2.3 trillion dollars so Peking might tell Barack to look elsewhere.  Should that happen both the Ukraine and those 18 European states could be in for a world of pain.  Frenchman would be forced to eat their snails raw, Germans would be forced to eat their weiners cold and the United Kingdom would be gagging on cold kidney pie.

Thanks to American oil companies and pioneering oil fracking we do not face that same fate here, though god knows Obama and his Secretary of Energy have tried their best to achieve $7 dollar gasoline and destroy the American coal industry.  But you can bet our European partners will not be too happy with Barack if they have to eat cold vittles for long.  They might even repossess his Nobel Peace Prize!

Though I'm not much of an Obama fan I will, for the sake of those poor snail eaters, throw him one bone:  Hey Barack, since you seem impotent in the face of strong leadership, no matter who wields it, why don't you try this on the Russians....round up a couple of dozen of those hip-hop and rap artists that you adore so much, then get their permission to broadcast that stuff on the Voice of America streaming into Russia 24-7....Putin just might open the gas pumps and let if flow again!