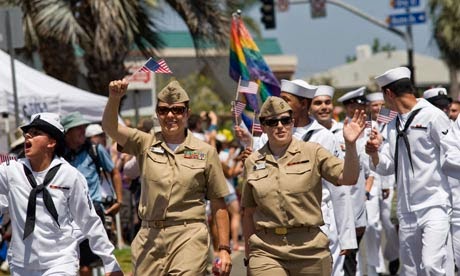 Well, we learned this past week how gays gained the courage to brazenly march in gay pride parades in full uniform.  Since it is clearly violates the Uniform Code of Military Justice, they're surely getting cover from the White House to do so.  We learned how military chaplains were ordered to conduct gay marriages or resign their commissions.  And we learned why the Joint Chiefs so readily accepted allowing openly gay military folks coming out of the closet.

It seems Emperor Obama, in 2010, called the Joint Chiefs in for a lecture, at which time he ordered them to accept gays openly in the military or resign their commission.   The meeting, and the order, was revealed when a demand through the Freedom of Information Act showed Admiral Joseph Papp, Commandant of the Coast Guard, recounting some information from that meeting when addressing a group of Coast Guard cadets back on January 8 of this year.

Sadly, that says two awful things about American leadership.  It shows Barack Hussein Obama's total disdain for military tradition, and that he indeed considers himself an emperor...and it shows the disgusting lack of courage of our Joint Chiefs staff.  What would Obama have done had all five of them rose up from the table, walked out of the Oval Office, and submitted their resignations post haste?  It would have killed Obama's dictatorial order in it's tracks.  This man-child would have backed off of that order and Don't Ask, Don't Tell would still be in place and gays would not be using the military uniform as "costumes" in gay pride parades.

But Obama won that confrontation.  And it has emboldened him to purge our military of over 200 senior military officers in the last three years.  They have been dismissed without cause, with most of them being canned for opposing Obama's disastrous foreign policy follies...or for being forced to accept lower training standards, or lower moral standards.

Here's what our military leaders are saying, as reported by Weekend Warrior Weekly:

Retired Army Maj. Gen. Patrick Brady, a recipient of the U.S. military’s highest decoration, the Medal of Honor, told WND that Obama’s agenda is decimating the morale of the U.S. ranks to the point that members no longer feel prepared to fight or have the desire to win.
“There is no doubt [Obama] is intent on emasculating the military and will fire anyone who disagrees with him” over such issues as “homosexuals, women in foxholes, the Obama sequester,” said Brady, former president of the Congressional Medal of Honor Society.
Not only are military service members being demoralized and the ranks’ overall readiness reduced by the Obama administration’s purge of key leaders, but colonels – who are lined up in rank to replace outgoing generals – are quietly taking their careers in other directions, sources confirm.
Retired Army Lt. Gen. William G. “Jerry” Boykin, who was a founding member of Delta Force and later deputy undersecretary of defense for intelligence under President George W. Bush, says it is worrying that four-star generals are being retired at the rate that has occurred under Obama.
“Over the past three years, it is unprecedented for the number of four-star generals to be relieved of duty, and not necessarily relieved for cause,” Boykin said.
“I believe there is a purging of the military,” he said. “The problem is worse than we have ever seen.”
WND for weeks has reported on the problems faced by the nation’s military officers.
Elaine Donnelly of the Center for Military Readiness says Obama has done “great damage” to the military by taking away resources and imposing “heavy burdens of social experimentation.”
“But most flag and general officers are following orders, keeping their heads down and, in my opinion, letting down the troops,” she said.
I guess what many of us fear is this.  Will Barack Hussein Obama be successful in destroying every traditional American institution before he leaves office?  It's not looking good.
Posted by A Modest Scribler at 2:00 AM