Musings; On Politics and Comedy 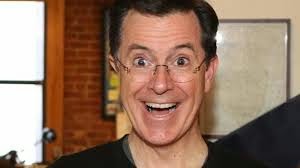 A bit of potpourri today.  First of all, CBS has announced that Stephen Colbert will replace Letterman on the late show.  Won't last more than a year or two...center right America will be gagging on this liberal clown before the year is out.  Secondly, he's not funny; anyone whose seen him perform for more than 20 minutes, sans his faux conservative schtick?  Torture.  Go U Tube his performance (one time and done) at those supposedly funny press dinners.  Ugh-ville. 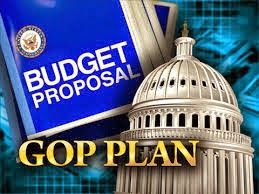 Now for something not funny at all.  Every year for five years Congressman Paul Ryan has trotted out his annual budget plan.  It calls for "semi-drastic" cuts in the trillion dollar plus deficit spending road we've been on since Obama first raised his right hand and swore to uphold the Constitution and protect our nation from our enemies foreign and domestic and all that jazz.  Ryan's budget proposes to balance the budget within ten years.

Well Ryan's plan is the dose of medicine America desperately needs to take...but refuses to do so.  His plan calls for eliminating Medicare and Medicaid and, in lieu of, provide vouchers for seniors and the indigent to buy a medical plan that fits their personal needs; i.e. now seniors are paying for birth control pills and abortions under Obamacare when they themselves are long past the child bearing age.  They are paying for high risk HIV patients and pediatric child care.  Ryan's plan would give both Medicaid and Medicare users the option to buy only what they need and it would eliminate some 200,000 federal bureaucrats who pay the bills and decide what treatment you can have.  Ryan argues that the free market, with health care insurers free to market in all fifty states, will drive down costs, eliminate the government bureaucracy that eats up 30 percent of every Medicaid/Medicare dollar and keep the programs funded...as it is now the CBO says the two programs go broke in less than ten years.

Democrats say the government does a fine job and the trillion plus dollars lost to fraud, waste and abuse is the cost of doing business....and don't look at the balance sheet!

Ryan's budget calls for lowering corporate taxes from the highest in the developed world (35%) to 25%.  He argues that this is incentive to bring back business to America, create jobs..and expand the tax base so that more Americans are paying taxes and not living off the government dole, thus reducing the costs of welfare and government aid programs.

Democrats say it's a give away for the rich while cutting aid to the poor....even as more companies flee America for greener tax pastures.

Okay, I could go on and on with all the grisly details but no need...here's the basic point:  WHY ARE REPUBLICANS SO GOD DAMNED STUPID?  Harry Reid's Senate has already said they won't do a budget this year; they'll just do a continuing resolution that extends the current one.  Why?  Because every time Dems do a budget America gets a hard look at that trillion plus deficit spending spree and become a little uncomfortable...and Dems definitely don't want Americans uncomfortable in an election year.

So why do Ryan and the Republicans keep holding the spoon of bitter brew and waving it in America's face?  Why give the liberal Dems all those talking points come election time? ..you know the ones...the war on women, the Republican hate for the poor, etc, etc.  Why do they Republicans do it?  To show America that they are serious about spending?  "Earth to Republicans!"  Americans are stupid!!  They can't puzzle out what deficit spending means, they don't care about the costs of government bureaucrats, or program fraud...hell they can't even tell you who the VP is..and they only know Obama cause he's a regular on the late night talk shows!....just keep the gravy flowing and damn the costs!

In an election year where Obama has screwed the pooch with Obamacare...in a year when he's really pissed off the American people, why the hell give Dems those class warfare talking points?  The Senate has already said they'll put nothing on paper...why do you?

Why the hell can't Republicans do what Obama does?  Lie your ass off, keep that god awful fiscal medicine far back in the medicine cabinet, then when you win election do what the hell you want to do!  As I said, the American people of this era are criminally stupid...they'll fall for anything.

Now take that damn Paul Ryan budget and put it in House Speaker John Boehner's bottom drawer and forget about it!  Alas, too late...it passed on Wednesday, on party line vote..the Senate will not even look at it....and it's the Dem's script for all their campaign ads this summer.

I just want to punch that pic of colbert, just like the punching clowns that were inflatable.