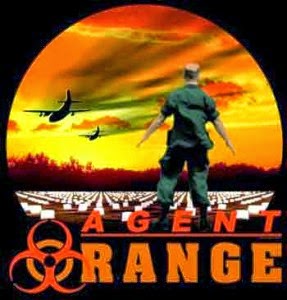 We'd rise before dawn, put on our jungle fatigues, strap on 180 rounds of M-16 ammo, throw on our flack vest, then climb into a deuce and a half and be transported to the flight line.  We would board a C-123 or C-130 and head up north country to Phan Rang Air Base, or Da Nang, prepared sometimes to augment security forces in those locations because they were under heavy sapper or mortar and rocket attack.  Sometimes those early morning flights carried us to heavy weapons training up in Phan Rang.

As our C-123 or C-130 taxied to the runway we would already be nauseated by the overpowering smell of horse shit...the residual effects from an earlier mission where the plane carried a load of Agent Orange.  As we flew low over jungle terrain, the back port open, we were grateful for the air flow that would dissipate the smell of the Agent Orange.

Sometimes our exposure was more direct; we'd be out on patrol, or manning a stationary observation tower and hear the roar of the plane as it flew low over us....and we would feel the gentle toxic rain as it settled on our helmets and flack vests...and we didn't know the difference between a navel orange and Agent Orange.

Twenty years later the reunions for my old outfit begin to get smaller and smaller...and I am reading obituaries for guys in their early forties.  The casualty lists becomes frighteningly high as the years pass; stomach cancer, kidney cancer, bladder cancer, Parkinson's, Multiple Sclerosis, lung cancer, and a whole passel of fringe diseases no one ever gets.

Soon there are ten thousand times ten thousand cases and class action lawsuits finally force the VA to look at the effects of Agent Orange.  The statistics are so wildly out of whack, so that, after twenty years of denying any causative factors between Agent Orange exposure and dreaded diseases, the VA finally accepts the findings of thousands of medical researchers who testified to the devastating effects of exposure.

But the VA would only go so far; you had to have Agent Orange raining down on you to win VA care.  This has been the approach for the VA for two decades since they were forced to fund treatment.  However, thousands of veterans have been left out in the cold because the VA has attested that "minimal exposure" is safe.    For example, if a G.I. simply worked on an aircrew where the Dioxin was transported they could not be treated.  Vets  presented their medical cases to the VA and whole armies of toxicologists testified as well...all to no avail.

So a few years ago the Center For Disease Control sent a team down to the Air Force boneyard in Arizona to run toxicology tests on old C-123's and C-130's that had been mothballed for 30 years...and found Dioxin residue levels that would increase your cancer risks by 200 times....and this after 30 years!  The Air Force was concerned enough to crush all those planes and melt them down.

Vets have appealed their case to the VA, to the Secretary of Defense, and even to President Obama, all to no avail.  The VA attests that treating such a wide swath of those affected would costs hundreds of millions of dollars.

Soon the problem will go away; those now suffering from a variety of cancers, those now relegated to wheel chairs with severe neurological disorders will be buried too, given a proper military funeral, with color guard, the playing of taps, and the presentation of a flag to his loved one. And America, and the VA, and the politicians need never worry again about the "real" costs of war.

I've been fortunate.  Though my doctor wants to throw a medical convention every time she gets the readings on my blood and hormone tests, though I and my two daughters have thyroid problems, and my oldest daughter, sans make up, resembles a raccoon from rare skin pigmentation woes,  we've dodged the more deadly bullets.

I only wish that Congress and the Commander in Chief, when they begin plotting the next place to send our troops...I only wish they would factor in far more than the costs of hardware and bullets, and calculate the "real" costs of sending our young into harm's way.

Killing us softly.
Posted by A Modest Scribler at 2:00 AM

Now you know why I am cynical! Too many of my friends, all Vietnam Vets have died, theoretically while safe back on American shores. We have never taken care of these veterans nor any others. Today I see homeless veterans on the street corners and realize that some of these are the better off ones. We seldom see those missing arms and legs or half their heads. And when they discover they were really fighting for the giant corporations and big oil, it is easy to feel lied to and deceived. Makes you kind of crazy, huh?

Jerry, I can always meet you half way, but rarely all the way. Don't agree that we were fighting for corporations or big oil...However flawed, there was a little thing called the Domino Theory back then and there were good honest people that believed in it.

But heaven knows you are right that we enter too easily in foolish wars...I happen to believe the last two were even worse...but again, not for oil...if that were the case we would have just stayed in Iraq and started pumping.

Half way is great! Too bad Rwanda didn't have oil, huh?
I would love to believe that our wars are for truth and justice but I remain skeptical. Lots of veterans have thrown their medals away because they became disenchanted.
We will find a drug for that.

I also am a believer of "The Domino Theory". I believe that history showed us that because America came to the aid of South Vietnam, other countries decided to stand up against being taken over by Communism.