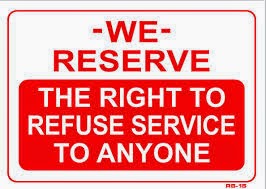 Try to imagine the government, whether local, state, or federal, having to come in and close your business because you refused to honor your commitment and offer the specific services that you proposed to carry out when you opened your business.

Imagine a gas station that refused to sell you gasoline.

Imagine a McDonald's joint that won't sell you a hamburger

A Day Care Center where "no kids were allowed?"

How about a bar that limits you to two ounces of Budweiser?

Would you get a little upset by this?

Well, that seems to be what American educators are offering our kids, even as we pour hundreds of billions into the school system and they are turning out illiterates whose only employment option is to flip burgers, bag groceries and sweep floors...and demand a $15 dollar per hour "living wage" to do so.

Why, America, are you not upset about a massive failure of the school system to deliver on their main business?

I was just reading this morning that the University of Nevada, Los Vegas has had their football program placed on sanctions for the failure of their football players to meet minimum academic standards.  Folks, do you know what those standards are?....A  2.0 (C) average!  And keep in mind, these big galoots traditionally major in physical education with a boat load of basket weaving and pottery class electives!  And they can't score a "C" average!

Oh, it's not all dark for UNLV...they can still play all the games on their football schedule...they just can't play for a championship or a bowl game next year.  And, sadly, it took the NCAA to impose these sanctions cause UNLV thought everything was hunky dory even if their quarterback can't read basic road signs or the little talk balloons in the daily comics!

As you know I read a lot on the internet,  especially political sites, always mining for blog fodder to feed you readers.  One thing I've noted in the last few years is the dearth of cohesive writing on posts from site commenters.   I'm starting to believe that soon, very soon, we're going to have abbreviated texting code cause so few seem able to compose the written word...and when they do, they can't spell worth a damn.

I don't know about other states, but Arizona does tend to close a few schools that fail to educate our kids.  Each and every time they do so there are scores of teachers and Obamanites who march in the streets and cry foul.  We need to close far more.

Folks, if I told you that we are spending $602 billion dollars a year in state and federal dollars just for k-12 education wouldn't you consider that a fair amount to expect a quality education for our kids?  If I told you that we spend over $13, 500 a year, the largest per student expenditure in the world, wouldn't you expect something back for that kind of dough?  http://www.edreform.com/2012/04/k-12-facts/.  Well we're clearly not getting it.

Post Script:  The Chicago Tribune is reporting that three Black school districts are crying foul that the City has chosen to close three city schools that have been on probation for as long as fourteen years with no improvement in student performance...of course they cried "racism" in spite of the fact that the city school superintendent is Black...a cry of "racism" seems to be their biggest defense mechanism.  Oh!  Not a word said about 75% Black families without a daddy at home, about parental failure to enforce homework, etc.  And the teachers unions are bravely defending even their worst teachers.

Education seems to be reflective of all our societal ills. When I taught in a Junior High School I could always spot the students who didn't have a book in the house and never read the newspaper. I do think it will take More Money however. We spend more on our prisons than public education. If a teacher had just 15 students in a class and only five classes per day that would be 75 essays to read each time they were assigned. It is far easier for the teacher to have no essays, just tick the right answer and no homework to grade. The real math is over 30 and sometimes 40 students per class and six classes per day. All that said, you are right, we have about the worst school system in the world. Symptomatic of society?

If we could get rid of all the over paid bureaucrats and the union protection of bad teachers, our future and our children would have a chance.

Jerry, if the teacher's unions would stop defending bad teachers I would be willing to pay teachers a hundred thousand a year...the good teachers are worth that. I also agree that the problem is complex and that societal ills are as responsible for our education system failures as anything else.

When I was stationed in Korea Los Angeles City College was offering extension college classes to military stationed overseas. i taught for them for a year, and yes it was a tough job (though my students were highly motivated and anxious to learn which was a huge plus for me).

Back to our system, I have looked at the numbers and it sure looks to me like the education system is bloated with bureaucrats and teachers seem to get the short end of the stick when it comes to funding and salary. I kind of think that $602 billion we now spend could do the trick if we insisted on efficient results. (I won't even get into my old saw about having to educate millions of illegals...having to fund and "special fund" (teaching them English) these people robs our own kids of money and resources that could be put to better use.

Craig, as I said in my blog...totally agree.

I honestly don't know why teachers support the union. They protect the worst teachers while throwing the others under the bus. I personally know good teachers who were mistreated by the superintendent against the law and school policy, and the union rep just told them to play ball. One hired a private atty who pointed out the school district's liability and saved the day while the union atty did NOTHING. I can only assume that teachers just don't want to have to negotiate their own salary and benefits like any other non-union white-collar worker does. Teachers and the public pay a HUGE price for that small service.

Anon, I'm as baffled by it as you are; I hear lots of political talk about getting rid of bad teachers but nothing ever happens! As I said it the blog, I would love to pay teachers $100k a year for the good ones...and canned the zombies who just keep passing their "problem" on to the next grade.