"Honky" Criminals Falling Down On The Job 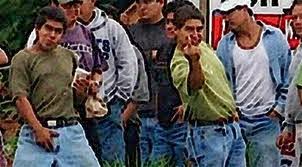 Dreary crime news all this week.  In Detroit a caucasian tree trimmer is driving home when a Black youth steps off the curb and onto the street, and is hit by the tree trimmer's truck.  The White Driver stops to render aid and to call for help.  Some fifty urban Blacks attack the driver and beat and kick him senseless and leaves him to die in the street.  He is now in a medically induced coma, in critical condition, and his chances to live are dicey.

Two days ago, here in Phoenix, a 67 year old man walks up to the 7-11 in his neighborhood, buys a six pack of beer, and in a spirt of charity, offers a can of cold beer to two hispanics just entering the store.  The two Mexicans follow the guy out of the store and, apparently offended at being spoken to by a gringo, follow the old guy down the street.  The Mexican in the passenger seat jumps out, runs over to the old man begins pounding on the back of the old man's head until he crashes to the sidewalk and lays inert and unresponsive.  He too is in the hospital in critical condition.

Then, Saturday morning I read the FBI's recently released annual crime report.  The FBI report says 80% of all American crime is committed by illegal Mexicans, many of them having been recruited by the deadly M-13 latino crime gangs that infest every American city.  The FBI attributes their successful crime spree to hundreds of millions of drug profits rivaling the largest drug cartels in Mexico.  The report asserts that nearly all drug traffic in America is run by M-13 gangs.

I guess my question is "what the hell happened to all our honky criminals?   Have American criminals joined "47 per centers" who live off of the government dole?  Are they now so lazy that they find gaming food stamps and a welfare check easier than criminal activity?  What happened to the good ole pioneering criminal spirit?

By the way, La Raza was up in arms after reading the FBI's latest report.  While they can't deny the FBI stats, because they are based on actual arrest activity, La Raza is now arguing that, per capita, Blacks have a much higher crime rate, and that, if deportation of latino criminals is common practice, why doesn't the government ship Blacks back to Africa?  (Folks, don't ask me to explain this circular reasoning; I'm just reporting the news.)  I guess La Raza chooses to overlook the fact that Obama ordered the release of some 70,000 Level One Mexican felons back into the American community just last year.

The only thing I can conclude from all this dreary news is that we would certainly enjoy a much lower crime rate if we ever chose to hold Blacks accountable for their thuggish behavior, and if we deported the 30 million illegal Mexican invaders.   Think of how many criminal opportunities we could open up for our own honkies just by dealing with these problems.

If you're a glutton for punishment, here's some more dreary crime news, reported by the Federation for American immigration reform.  (This is just three months worth of isolated news items extracted from the news media.)

The information below is taken from news sources. The aliens in these reports were all identified as being in the country illegally, and many of them had come into the hands of law enforcement agencies prior to the crime that is described below, but the alien was not deported or in some cases was deported but reentered the country.

Put tracking chips in the illegals then deport them. When a blip on the screen is seen moving toward our border, eliminate the blip.Shouldn't take long for the message to get around that once deported stay there.

We don't deport the blacks cause they came here 200 years ago before there was a law. What Maroons. And I second Graigs idea.

We don't deport the blacks cause they came here 200 years ago before there was a law. What Maroons. And I second Graigs idea.