An Army Of The Republic 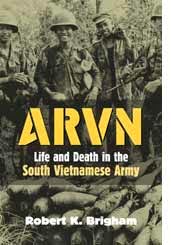 I just received a forwarded email from an old marine who was mourning the death of one of his old comrades from the Army of The Republic of Vietnam.    I too mourned the death because I know of the heartbreak of millions of ARVN troops who lived lives of quiet desperation after the North Vietnamese Communists took over that country in 1975.

My Vietnamese brother-in-law fought for his country, right along side we Americans.  When the war was declared over, and we all came home, the war for our Vietnamese allies would continue.  My brother-in-law was stripped of his South Vietnamese uniform and shipped off to a Vietnamese "re-education camp".  There he was tortured, fed slop that a hog wouldn't eat, beaten repeatedly, and when they had defeated his spirit completely, they sent him home to die.   And this he did...he died painfully and at a painfully young age.  His crime; fighting for his country.

I had read a book about this sad story several years ago.  The book left me in tears and prompted me to write a Letter to the Editor of my local newspaper.  I just felt this story needed to be told.  The letter got little response because Americans want to forget wars, especially losing wars, as quickly as possible.

But it has always been hard for me to forget this story....the story of millions of Vietnamese vets who were tortured, then if they survived, were sent home to die.  And so many did.  These young men were barred from employment by the government, and much of the private sector, branded as traitors to the Communist cause, and were forced to live in tin can shacks or on the streets.  Some, lucky enough to have lost arms and legs could go to begging in the streets, but for those scarred from the inside, or ailing from a broken heart, were forced to survive any way they could.

Now, if I this is even a little bit hard to understand, try to imagine that you had served in America's armed forces.  Imagine you have risked your life, sacrificed years away from family, have chosen to fight for a bigger cause than yourself, and then are punished for that service.  And yes indeed, we have millions right here in this country who suffer from the after effects of war, to include the ten percent who are homeless today.   But even these poor wretches have it better than those ARVN guys who are desperately trying to survive in a country where the government despises them.

Thanks to the email I received this morning I've found a more tangible way to help.  A group of retired Vietnam vets have formed a 501 charity to provide financial help to these Vietnamese heroes.  It's called the Vietnam Healing Foundation.  This foundation was started when some American Vietnam vets returned to Vietnam and were appalled at how their old comrades were living...and dying.  Because the Communist Vietnamese bars assistance to these vets, the foundation is forced to work in the shadows, finding Vietnamese vets, validating financial need, then sending money for food, or medical treatment, or support for their children.  The fund is so tiny, their cause so little known, the foundation has only been able to aid 80 Vietnam vets directly and another 80 or so indirectly.  Their web site is so neglected I get more hits on this blog in a day than they get in a month.  I sent them a small check this morning and my heart is a bit lighter for it.

Should anyone want to send them a couple of bucks, the address is Vietnam Healing Foundation, P.O. Box 641, Willow Springs, North Carolina, 27592.  They also accept Pay Pal.  Here's the link to their website:  http://www.thevhf.org/www/index.php?option=com_content&view=article&id=56&Itemid=72

It always pisses me off the way our vets are treated,the treatment of vets in other countries is in-humane and tragic.Thanks for the link, taking out my checkbook. thanks for your service.

Good for you, Craig....giving to a good cause always makes me feel good too. I'm not much for formal prayer but I do send up little prayers that their lot will improve.

I, too, get pissed with the quality of treatment our vets receive here, not to mention in other countries! Sending a donation.

You are such a giver, Carol. You know, one of the things that breaks my heart is the fact that Vietnam is now one of America's bigger trading partners. All it would take to lift the work sanctions on former Vietnamese military folks would be for America to demand it if the Vietnamese want to continue making billions from this country.

Sadly, it is just easier to forget them in favor of the almighty dollar.

I may give little, BUT, I do it for the right causes. When I feel it in my heart then I know it's right!

Carol, from what I've seen your heart is always in the right place. May our creator always bless you for your kind heart.

The vet that runs the website actually wrote to me wondering how I found it. He ended up calling me to place an order for my natural soaps as a 'pick me up' gift for his son & daughter-in-law. Ya just never know, huh? :)

That is so nice, Carol...you are indeed blessed.