"Thank You For Your Service; Now Please Die!" 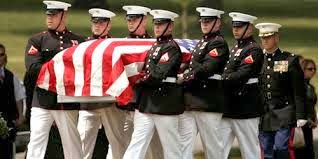 I've reported on many occasions the massive fail of the VA Hospital.  I've recounted the government's abandonment of caring for millions of veterans when they began means testing to qualify for care in the mid 1990's, I reported on the scores of deaths attributed to negligence at the Pittsburgh VA Hospital.  A couple of years ago we learned of patient negligence and abuse of veterans here in Arizona.  Then, just this week we learned that the VA is probably responsible for the deaths of at least 40 veterans because of VA delays in treating them.  A retired VA doctor reported a long history of abuse and falsified records to an Inspector General Investigative Panel last year...yet no one was fired, and the deaths continue.  Seems the VA was keeping two sets of books falsifying medical care that was never provided.

Most Americans will never hear of these ills.  Instead we heard Obama and McCain laud the example of the VA Health Program as clear evidence of how effective government provided health care can be.  Pure fiction.

Both state and government officials are scrambling to mitigate citizen criticism.  The Congressional Panel on VA oversight was in Phoenix to investigate.  The governor is planning to hold a press conference and voice her shock at this tragedy.  And yet, all over this nation, veterans are getting the short end of the stick, even as millions of welfare folks, who never served a day, enjoy good medical and dental care, with lots of political oversight.

A veteran was found laying face down on a cement patio, having fallen out of his wheel chair while left unattended.  When someone finally came around to check he was experiencing a high fever and second degree burns on his face and arms.

A VA nurse got a hold on a veterans' bank account and cashed $4,300 dollars for her own use.

A VA patient was given meals that he couldn't chew because he had no dentures.  The hospital ignored requests for meals that the patient could eat.

Nurses failing to change gloves when moving from one patient to another.

Brian Houston, whose wife, Deborah, called the Tucson veterans facility her home from the summer of 2013 until February, questions the state's ability to adequately operate another home.
He said the staff in Tucson mistreated and neglected his wife, an Air Force veteran.
He claimed, among other things, that staff banged his wife's head and knee into a wall while moving her on Christmas Day, left feces in the shower for days, were slow to respond to requests for oxygen, and provided care that resulted in bedsores.
"I've seen things you wouldn't believe " said Houston, who has his wife's name tattooed on his arm.
He said his wife was discharged after his repeated complaints to staff, administrators and public officials.

"Thank You For Your Service...Now Please Die"...because the government just doesn't have the time or money to care for you.

You missed the drugs! We drug our older and ill members of our society whether veterans or not. Drugs are still the cheapest treatment. At least in Israel they admit this and in nursing homes there they have marijuana!

The VA system is window dressing for socialist dreaming of how wonderful our goverment is. I am enrolled in the VA system, it is overstaffed with bureaucrats only wishing to advance in pay grade and have a public pension that is out of proportion with the private sector. The health system in the US will collapse if the VA is the model, as you say: "sad, damn sad!"

The VA apparently also issues pot, Jerry, or at least that's where on vet told me he gets his.

Anon, thanks for your experienced opinion...i agree.

A nation/civilization is measured by its treatment of its elderly, its children, and its veterans. US is running 0-3.