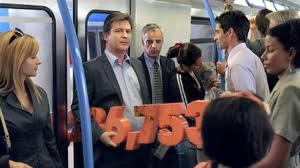 Okay, it's been 45 years since the Voting Rights Act was passed.  It has been 42 years since racial preference quotas were mandated for everything from college entrance requirements to federal employment mandates.  Racial equality has made tremendous progress in the last five decades.  I think it's damn near time that we stop the "political correctness" in advertising.

I refer to the dozens of commercials where "the white guy" is always the dunce and the black guy is the "wise one".  How many of us have seen the Carfax commercial where the elegantly dressed and mannered black couple occupy the other side of the car dealership desk while the white guy in clown shoes is trying to deceive them into buying a car without a carfax report.

How about the ING commercial:  You have a black guy clipping his lawn hedge in the front yard of his elegant and upscale house.  Along comes this white idiot with a big dollar sign hefted across his shoulders.  The white guy stops and the black guy asks him what "dollar figure" he has planned for retirement.  The white guy "duhs" and "dohs" and says he doesn't have a retirement plan number.  The black guy asserts in amazement "so you don't have a plan", showing just how dumb the white guy is and how wise the black guy is. Some honkey must have complained because ING now has both the black guy and a white guy playing the superior.

Okay, you  say I'm making too much of a deal on this.  Okay, try this:  I challenge you to name me one commercial in which the hispanic or black guy or female plays "the dunce", "the clown", the "dummy!"  Name just one!  We have gone so far on the "politically correct" side in our society that minorities can never be portrayed as anything but endearing, wise souls who are never guilty of even the smallest faux pas.

We saw this trend begin with the black comedies in the 80's.  They all seemed to have a "token white dummy" on the show to utter really idiotic utterances to show just how superior the black characters were.

When I see an old 30's movie and I see how blacks were portrayed as servants who all uttered mush mouth pleadings to their white "betters" I am ashamed that our society demeaned a whole race in such a cavalier and harsh manner.

Yet, that is exactly what advertisers today do to white every day of the week 24-7.

The Census Bureau says whites will be the minority class very soon.  Honestly, I can't wait!  I'll then be elgible for all kinds of preference quotas and, perhaps then, society will begin treating us with a little more respect.
Posted by A Modest Scribler at 1:42 AM