"Political Revolution, Then and Now" 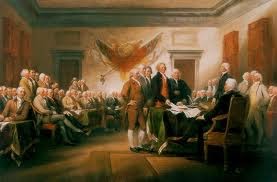 As I watch the news today and see that Speaker of the House, John Boehner, is having difficulty whipping up support for the latest Republican Debt Ceiling proposal, I am reminded of that first Congress that 235 years ago authored our Declaration of Independence.  The members of that Congress were also strongly divided over what course our nation was to take.

Speaker Boehner's difficulty is with those 87 Tea Party Republicans who are revolutionary in their attitude regarding raising taxes and in insisting that controls on spending be imposed through a balanced budget amendment.   The current crisis is not unlike the one that was brewing in that first congregation so long ago.  That early congress was strongly divided over the proposal to break away from Britain.  While all of them had strong concerns about British policy with the colonies, many of them believed that King George should be given more time in hopes that the monarchy would back off of policies with which the colonies cried grievance.  In point of fact, several letters had already been forwarded to Britain and had been ignored and scorned at.  Still, somewhat more than half of congressional attendees were opposed to declaring Independence.  Many weeks passed, with the harshest of words exchanged before consensus was reached to publish those marvelous Jefferson words.

In an age of common political skepticism, where it is thought that all politicians are without courage or principle, I have great admiration for those 87 Tea Party legislators who are trying mightily to stick to their guns and to keep their promises to their constituents.   These revolutionaries know that Boehner's proposal will do nothing to stop the explosive growth in government spending.  Even the Ryan plan, which sent the Washington establishment into snit fits, does not bring the budget into balance; it only slows the explosive growth.  These Tea Party patriots have stood tall in the face of ridicule from all sides; liberal Democrats as well as legislators like John McCain who demeaned their intent on the floor of the Senate yesterday.  McCain and the other establishment legislators, already corrupted by far too many years in Washington, just cannot understand.

Knowing Washington, my best guess is that some form of compromise will eventually be arrived at.  When "the deal" is done I will be sad and a little less hopeful that we Americans are brave enough to face up to our problems.  But, for now, I am awed by the courage of a small band of patriots who stood up to the big spending liberals and the corrupted souls of old world Republicans who sold their soul to special interests and to half a nation of "takers" who refuse to recognize that the gravy train has run off the track.
Posted by A Modest Scribler at 3:29 AM

Well, Just, I think I've made my feelings known on this subject. What our forefathers were agonizing over was "the" paradigm shift of their times. They were very aware that wresting sovereign power from Britain would result in resistance of the highest order, and the largest mitigating factor was MONEY. Almost to a soul, the Continental Congress members were the landed aristocrats of the Colonies, and had the most to lose,and gain, by the Declaration. Fortunately, they understood that without the support of the common people, any war would be doomed from the outset. I most vehemently agree with the Declaration, of course, and consider it a more important document than the Constitution, as it is the document which made us a country.

Every government degenerates when trusted to the rulers of the people alone.The people themselves are the only safe repository.

Experience hath shewn, that even under the best forms of government those entrusted with power have, in time,and by slow operations, perverted it into tyranny.

For a people who are free, and who mean to remain so, a well organized and armed militia is their best security.

Grenadavet, that's what I think is so wonderful about the Tea Party. The TP are the only ones left who give a damn about the direction the country is taking. As I have asserted many times on this blog, half of the American people are "on the take"; they pay no taxes and half of them are taking some form of government largess. The Tea Party is either the first wave in the attack against big government dictatorship or the last dying gasp of a once great nation. Only time will tell.