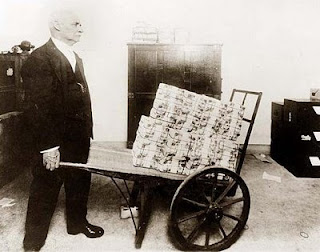 As bizarre as this looks, during the Wermacht regime in Germany in the 1930's, folks took wheel barrows to the grocer.  So worthless was German currency that this bought a loaf of bread.

Wouldn't it be wonderful if our nation were not playing "catch up" with the current financial crisis?  Can one even imagine the number of new business start ups and the millions of new jobs that could be created if the government's ravenous hunger for the available money supply was not crowding out young businesses from the credit markets?  Think about this:  For the last decade, each year the federal government must soak up $3.9 trillion dollars of the available money supply just to keep operating!  After collecting federal taxes ($2.2 trillion) which comprises 25% of our entire out put of goods and services (GNP) the government must then go, hat in hand, to bond purchasers in Japan and China in order to get the other $1.7 trillion needed to fund the massive government programs, many of which are chock full of fraud, waste and abuse.

How has the U.S. government managed to do this?  First of all, by printing money that has no intrinsic value.  These greenbacks are no longer backed up by a gold standard, but is, instead, supported by the idle notion that the federal government will always pay its obligations.  The second means for achieving this massive "fund raising" has been to keep costs under control by the Federal Reserve's maintaining artificially low interest rates.  The Federal Reserve is hoping that the taxpayer is looking the other way as they rack up $2.7 trillion dollars in borrowing that eventually must be paid for by the taxpayer!  The only other way to get out of this massive debt problem is to inflate our way out of it.  Yep, if you've been following me, you will now realize that inflation is looming on the near horizon.  The only way the federal government can ever succeed in keeping up the interest payments on this massive debt is to inflate the currency and pay this debt off with cheaper dollars!  Is it any wonder that the wealthy investors have been buying up gold? It's gone from a $1,000 an ounce to $1600 plus as of today!

Why should you care?

Well, let's take a look at the last time this happened.  It was during the Jimmy Carter administration.  After Carter ran this nation into the ground we had a real mess and we all suffered enormously.  Now, all you "doubters", I want you to go to Google and type in "inflation rates; 1978 to 1980.  You'll find that the inflation rates rocketed up to 18 to 20 percent annually!

Now, I want you to think about this.  At 20 percent annual inflation, your paycheck after five years, without a pay raise, is worth zip!  How many employers are giving you 20 percent annual pay raises lately?  It is even worse for those who are living on a fixed income pension.  Let's assume you are pulling in $20,000 dollars per year from an annual pension.  After five years of massive 20 percent inflation, your fixed income pension is worth $10,000 dollars per year.  Keep in mind that energy and housing and food costs are rising in lock step with inflation so your fixed income pension will now buy only half of what it would buy only five years earlier!

Also, dear friends, while you're at Google, type in "home mortgage rates for the years 1978 to 1981.  Would you believe you'd be paying 14 to 16 percent mortgage interest rates?

Do you now understand all of the games the feds are playing with you?  By printing worthless paper dollars, by keeping current interest rates artificially low and by the government's massive spending, the federal government is setting up the "perfect storm" for financial collapse and the resultant pain and suffering of millions of Americans.

Let's put this in perspective.  In May the House passed the Ryan Plan budget.  The Ryan plan called for cuts in government spending of $6 trillion dollars over ten years.  Sounds pretty impressive, doesn't it?  Well, the Democrat-controlled Senate gagged and voted it down quickly!

Guess what?  Even if the Ryan Plan had taken effect our national deficit, according to the Congressional Budget Office, will continue to grow from the current $14 trillion to over $20 trillion over the next decade! The Ryan plan only slowed the rate of deficit growth; it didn't stop it!

What was the Democrat's solution?  Well, the Democrats have controlled Congress since 2006 and for the last 815 days they haven't even proposed a budget!  Know why?  Because they know the American people will revolt at the real costs of all of their in-place entitlement programs!  We do have the Obama budget proposal that was submitted to Congress in April.  The CBO scored it and reported that, under Obama's proposal, the deficit swells to over $26 trillion dollars in ten years!

So why are Americans putting up with this?

1) Half of all Americans pay no income taxes at all and could give a fart less what the government spends.
2) Most Americans are too damn lazy to read anything of consequence about our debt problems and won't even know what hit them when the inflation storm hits.
3) Many people are more than willing to listen to Obama's eloquent promise to "take care of them".
4) There is just too few of us who give a damn
5) The only people that can even imagine the pain of massive inflation are those of us who lived thorough the Carter years.

If you care, take five minutes and write a three sentence email to your senators and congressman.  Simply say "I want this debt spiral to stop now!"
Posted by A Modest Scribler at 1:22 AM

Unfortunately this won't stop until we have a full fledged economic meltdown. However this may be the impetus for the paradigm shift that this country so desperately needs. You have to tear down before you can rebuild.

grenadavet; I fear that "breakdown" you speak of may very well be a 2nd Civil War. The government is broke so imagine when massive inflation hits and the libs are unable to provide bigger welfare checks and fund all the other goodies you will have three generations of tit-suckers who have never worked in their life, have no skills and will have to resort to crime to fund their "taker" lifestyle. Read my earlier blog "A 2nd Civil War".