"Aloha To Hawaii", Part I 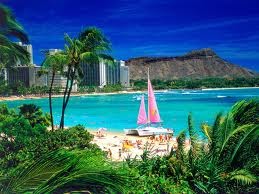 Living in paradise for nine years cannot be described in one blog so I'm calling this "part one".  I arrived in Hawaii in January 1977.  Still in the Air Force I was more than ready for Hawaii after having served three tours in Vietnam, three years in frigid North Dakota and a year in Korea.

The first thing I noticed upon disembarking in Hawaii was the sweet scent of plumeria.  When we all get to heaven surely the scent of plumeria will be the first welcoming sign.  The second thing I noticed was the validation of the "post card effect".  How many of us have looked at picture post cards of a particular place and, upon arrival, find that the post card was "doctored"; greenery and deep blue lakes were not nearly as beautiful as the post card.   Hawaii countered that notion; it was even more beautiful than any post card.  Upon arrival in Hawaii your senses are assaulted by powder blue skies, pristine beaches skirting azure blue waters that are as warm as bath water.  Plumeria and Hibiscus and other tropical plantings are a feast for the eyes and the warmth of the Hawaiian people will touch your heart as nothing else can.

My family and I quickly embraced the Aloha spirit and delighted in the joy of just being alive in paradise.  "Aloha Friday" signals the end of the work week.  By 2:00 pm on Aloha Friday, the collective "butts" of the working class are squirming for the end of the work day.  Mai Tai's awaited us at some palm shaded table with an ocean view.  Trade winds cooled our sandaled heels as we anticipated body surfing at Sandy Beach or a Huli Huli Chicken barbecue in Kapiolani Park on the weekend.  If football was in season we would plot out a tailgate party at the stadium in Aiea before heading in to see the Hawaii Rainbows take on mighty BYU...or even dream of an upset against mighty USC!

Being in the Air Force had its advantages; we had the commissary to ameliorate the high food prices in the islands and, on weekends, my family would travel over to the other side of the island to Bellows Air Station where we could rent a beach side cottage for less than $20 bucks per night.  We'd fill a couple of bags of groceries, pack our swimsuits and spend wonderful weekends in quiet respite from the demands of military duties.

One day in the spring of 77 I read a book by Jim Fixx called "The Complete Book of Running".  The book inspired me to take up jogging and there is no where more pleasurable to jog than in beautiful Hawaii.  I eventually built my jogging routine to five mile per day jogs and a ten miler on the weekends.  I was never more healthy or happy in my life.  One of my more memorable experiences was participating in Carole Kai's Fun run from downtown Honolulu out to Aiea to the stadium.  Runners often speak of a "runner's high" when body and spirit become as one and the runner feels no pain and no fatigue.  Though I had enjoyed my jogs I had never experienced a "runner's high".  However, one night at home I had just finished a book and felt restless.  I looked out the window and in the early evening sky I gazed out at a full moon.  I donned my running shorts and shoes and set off on an evening jog around the base.  After jogging a few miles I began to experience something like an out of body experience;  my legs were strong and my breathing was even as I began to take in the beauty of the golden moon above, the scent of plumeria in the air and the silence of the evening.  I could not stop running.  As I ran the perimeter of the base I passed the ships in Pearl Harbor, marvelled at the beauty of moonlight on water, delighted in the scents of sea and tropical flowers.   I ran and ran that night, ran as if I could run forever.  Finally, after almost three hours of jogging I came home to a quiet house.  Everyone had gone to bed.  I took a quick shower and quietly slipped into bed next to my wife.  The window above our bed was open and the cool trade winds cooled my body as I lay quietly in the night and thanked god for what I knew even then was an magical experience that I would remember for the rest of my life.

My kids grew up in Hawaii.  They still love it to this day.  Christmases were especially nice.  One would think the spirit of Christmas would seem somehow less when the temperature is 80 degrees on Christmas day.  The opposite was true; the Hawaiian people absolutely adore the Christmas season and the spirit of Holiday Aloha is so very strong one can't help but get caught in their high spirits!

I resumed my off duty college courses while in Hawaii, first enrolling in University of Hawaii courses conducted on bases in the area, then finishing up in residence at Chaminade University.  I graduated in 1980 and was selected for Officers Training School and a follow-on assignment (back to North Dakota!)  At that time the Air Force had a standing policy that you could not return and serve at an assignment as an officer where you had served previously in an enlisted capacity.

We left Hawaii for a second tour in North Dakota in 1982 after five years of blissful living in paradise.  But we would soon return!  Stay tuned for Aloha To Hawaii, Part II, to find out how!

Aloha!
Posted by A Modest Scribler at 1:55 AM

nice blog... have a view of my blog when free.. http://www.lonelyreload.com (A Growing Teenager Diary) .. do leave me some comment / guide if can.. if interested can follow my blog...