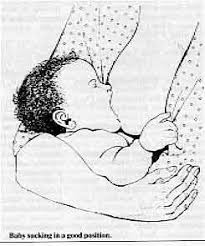 You will never see a baby crying while sucking on mommy's tit.  Never ever.  Won't happen.  So why are Americans surprised that there is huge support for Big Government's fraudulent and wasteful social programs?

Those same tens of millions of "perpetual tit suckers" have also been on Medicaid their entire life.  They have never had to make a co-pay to a doctor or hospital.  They have never had to pay a dime in health care premiums.  Because they pay nothing for health care they run to the doc at the first sniffle of a cold and the U.S. Surgeon General reports that a majority of these Medicaid tit-suckers are obese, thanks to the new "Food Stamp Credit Card" that allows them to buy fast food with their food stamp money!   An astounding 22 percent of Food Stamp kids have developed adult onset diabetes by the age of 12!

And what are the morals of these generations of welfare takers?  Just watch the news!  Just yesterday the national news reported on the "mob robberies" where fifty black kids enter a convenience store and strip it bare!..and they can't help it!  They are so used to "taking" they have never developed the values of honesty and the reward of "earning!".

To be fair some of these tit-sucking generation do take up careers!  They join gangs and deal drugs, commit robbery and adopt a life of crime to augment their welfare income!

So why do the Liberals promote this?  Because this is their power base!  These are the people who vote for liberals; they must vote for liberals to keep the freebies flowing their way!  The Liberals promote dependence on the government tit in order to maintain control!  They know that if they ever took the tit away the baby would whine and cry and they'd be finished!

Guess what?  The tit is rapidly running dry.  The Chinese and Japanese are already telling America to get their financial house in order or they'll stop buying U.S. government bonds.  Since the Libs are are already borrowing 46 cents of every dollar spent on keeping the tit full, the tit suckers are in dire straights.

When that tit is finally taken away, watch out folks!  Having never developed the career skills, or the work ethic to earn a living, you're going to see the tit-suckers screaming loud and often!

Read my earlier blog on "A 2nd Civil War".  It's coming sooner than you think!  http://justcommonsense-lostinamerica.blogspot.com/2011/03/2nd-civil-war.html
Posted by A Modest Scribler at 1:18 AM