"Life In Black And White" 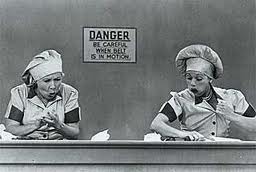 Sociologists can break down all manner of interesting information about the particular dynamics of specific generations; I've read studies about the personality traits of "baby boomers", "Gen Xers", "GenYer's", etc.  I suspect some of the societal conclusions are drawn with scientific accuracy.  Some seem to draw conclusions that seemed "stretched", to say the least.  However, I, as an amateur, can offer one specific and insightful conclusion about anyone born before or after 1960;  it is that most of those born before 1960 still have an attraction to black and white television while those born after run from it with gusto!

I've seen my kids and grand kids surf the remote and fly past those old Twilight Zone episodes as if they were spreading the black plague, sneer at Barney's hapless antics on Andy Griffith and watch Lucy and Ethyl on the candy conveyor and snarl cause there's no "color".

We baby boomers on the other hand, watch Andy and Barney and remember that it was on Tuesday nights at 8pm and if we hurried home from the Boy Scout meeting we could catch it.  Today, for us old farts, Mayberry is a pretty damned special little town because it was not unlike our own little hometown, a place where you could ride your bikes without a helmet, eat a burger at the drive-in without having to read the calorie and fat count signs and leave your windows and doors open without fear of a burglar...or worse.

Back then, the Twilight Zone was the scariest thing on television.  Today you have so many more choices; you can watch one of those reality crime investigation shows and see bloated corpses and scalpel cuts which, if you're aspiring toward a career in autopsy, puts you well up the career prep ladder.  Or, if you really want to be scared these days just watch the evening news!

So, while we boomers may be attracted to the seamier and more colorful side of today's television, we still like to retreat to an earlier time when we didn't have to see every skin pore in HD, didn't need to hear what the Trailer Trash on Jerry Springer think about their significant others and didn't need to see Andy and Barney conducting SWAT sweeps or tazering old drunken Otis.  We knew that, at the end of the day, Otis would be sleeping it off in the jail after Aunt Bee delivered his Fried Chicken supper, Andy would go home to take Opie for late afternoon fishing...and Ole Barney would be smooching with Thelma Lou out on the porch swing.

So Gen Xers and Gen Yers, I think we boomers have the best of both worlds.  We can watch the old boob tube in dazzling, high definition color...but when our souls become just a bit weary of all the pain of today's reality, we can cozy up in the old recliner and watch Barney ticketing someone for jay-walking.  Sometimes that's about all the action I can take.
Posted by A Modest Scribler at 1:30 AM

Ha Ha Ha! I love black and white! Especially in the old movies; I think it gives them a surreal and sometimes really scary kind of feel. I was born a little before 1960, loved Twilight Zone! Our youngest family members are Gen Z (later 1990s, early 2000s). The generation after Z is supposedly going to be called ALPHA. How Sci Fi is that? jo

I love black and white moveies, too, Jo. "12 Angry Men", Film noir like the old Alan Ladd//Veronica Lake mysteries, and early sixties TV shows. Thanks for your comments.

"The Rifleman" may have been the one I watched the most as a kid. Remember when TV shows used to strive to impart moral values? Although I must confess I love "3:10 to Yuma." Not quite your classic Western, the main character must struggle with what he knows to be right and the grim economic reality before him. In kind of a twist on your pre/post 1960s theme, I came across Elmore Leonard originally through "Maximum Bob" and "Get Shorty." I did not realize what a gifted Western genre writer he had been. jo