No Round Table Or Wrenching Sword From Stone In Our Future 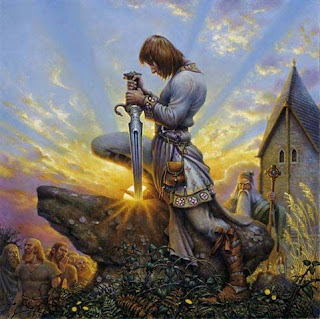 I slept fitfully the other night.  The day's headlines were on my mind as I lay in bed and travelled down the dreadful parkway of worry.  Our communities are plagued by the lotus-eating creatures who make it unsafe to walk the streets, necessitate barred windows and who, along with parenting in abstentia, are helping to tear our children to shreds with meth and opioids, and impractical quests.

And we have never experienced such a vacuum of principled leadership.  Our founders feared the very things we are living through today.  Though Washington was somewhat non-futuristic, Jefferson was fancifully hopeful and fearful at the same time about our Democratic Republic's chances.  Both Hamilton and Adams, suffering from royalist envy, were cynical from the start......believing that the average citizen was neither intelligent or principled enough to maintain a republic formed on the previous three century's best social philosophers.

For the first two centuries of our Republic we did okay.  We certainly weren't perfect.  We see-sawed through periods of controlled chaos, then managed to right ourselves through the adherence to the pillars of basic societal laws that held us together.  We spent the remaining part of the 18th century jelling into a coherent form, the 19th century fanning out over the country, our citizens moving west whenever they spied the smokestack of a neighbor's chimney, and the 20th century searching for our adulthood and trying to figure out our place in the world.

It was the 20th century when things went very right and very wrong for us.  Ignoring Washington's warming to stay out of Europe's unending warring, we fought two world wars.  Ignoring Adam Smith, perhaps the world's greatest economist, we suffered through the robber barons.....the Carnegies and Rockefellers......and our own personal greeds.  It would take a Great Depression to slap us silly and reclaim a work ethic and fear of hunger.  And we hired a fellow who wore tu-tu's and prom dresses at night, while by day he ran our FBI, kept the commies at bay for half a century, kept the streets relatively safe.

It was in the 1960's when things went really wrong.  Baby Boomers, spoiled by the Greatest Generation parents, came to find it acceptable to decide which wars they would fight in, which park they would openly copulate in, which drugs gave them the greatest high.

The 60's was a firestorm of the liberal Warren courts, the ascension of a psychopathic President who thought he could buy his place in history with the dispensation of "war on poverty" dollars while simultaneously fighting brush wars in Asia and elsewhere.

America since that 60's era has busied herself with mixing up a toxic brew of buying votes with government gravy, abandoning the PTA and parental responsibilities, allowing the courts to legislate instead of mediate, ignore our national borders, resolve the crime problem by eliminating the law itself and giving the miscreants a second, third, fourth or fifth chance at redemption.

And we have few leaders to lift us from our national morass.  The principled men and women pretty much stay out of politics, deathly afraid their entire lives will be examined under a microscope......which leaves us with pampering, unprincipled magpies who talk pretty, speak a good game, then fail to follow up on any promises.

Break out the history books if you want to see where our parkway of misery is leading us.  We are a broken nation and it is far too late for an Arthur to come along and pull Excaliber from stone, and sit us down to a round table to discuss and fix our ills.

Inevitably an unrulable nation descends into chaos.........a societal state where the emergence of a dictator seems remarkably attractive.  President Trump, far from being a dictator, regardless of how the Left perceives him, may very well provide the blue print for a dictatorial ruler who comes along in the next couple of decades.  It seems inevitable.  Our problems are just too complex to fix within the confines of the Constitution.  Instead we'll need a Caesar, a Hitler, a Mussolini, a Stalin, or a Mao to "make the trains run on time"...... a metaphor for a little social stability.   While the first "rulers absolute" will probably emerge from the Left, those guys never last.  Bread and toilet paper shortages eventually send them packing, with a cargo of gold to a political haven where they can't be extradited.

The boomers, and X, and Y generations can probably relax.  They can still feed off the last vestiges of capitalism and the thinning remains of a two hundred year old constitution.  It's our grandchildren we should mourn for.  It is they who will live under the iron-fisted rule of a despot.  By that time the guns will have been confiscated, the meth and opiod lotus eaters long since dead from mass executions, and everyone can feel secure from crime.........except for the institutionalized crime committed by an intrusive government.

It is at that time, when the eternal dreamers will open a book (if they are still allowed books) and wistfully imagine an Arthur coming along, pulling sword from stone.....and making things wonderfully right once again.  Well those dreamers can forget it.  America had her chance.  She has been saved more than once....by the founders who risked life and limb and property for freedom, by the millions in uniform who died to preserve those freedoms, only to see our citizenry piss all those freedoms away in grand fits of irresponsibility.

So that's what kept me up the other night.  At my age, when I should be worried about keeping my remaining teeth, drawing up funeral plans, or wiling away the hours in carefree splendor,  I lay sleepless, fretful for a republic I so dearly love, no matter how sick she is.
Posted by A Modest Scribler at 6:05 AM

The nation is far too broken for any political leader to "unite" us. Both sides actually hate the other. I was on the treadmill watching the Representatives spew their 1.2 minute soundbites regarding impeachment and it was both funny and sad. Funny, because nobody with half a brain believes any of them. Sad, because these are the individuals that wield the power of government. They, and they alone, make the decisions in the US. No, we are a broken nation now, and it's going to get worse.

It's saddens me to know how true this story really is. SO many people have no clue. Our Government has let us down.

Actually, Ralph, we let ourselves down. Our government will never be any better than the people who elect them. Old Tommy Jefferson warned us of a time when the electorate could choose leaders who would grant benefits in exchange for votes. We have arrived there.