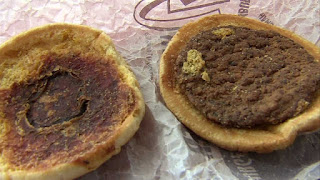 Egyptian Mummies?  Big deal.   In 1999 a Utah man strolled into McDonald's, ordered two hamburgers, ate one and stuck the other one in his coat pocket for later.  Except the Utah dude forgot about that burger.  He did not find it until 2013, just after its 14th birthday.  Astonishingly the burger was doing just fine.  No mold, no green slime, nothing!

So every year about this time I check in on how that ancient burger is doing.  Just fine I'm glad to say.  I hear it made an appearance on CBS as well as the medical show, The Doctors.  It was there where the docs examined the burger, proclaimed it free of rot, not stinky, the only sign of age being the dried up pickle.  The doctors explained that there are so many enzymes and preservatives in a McDonald's hamburger even bacteria take a sniff and walk away.

As the McDonald's hamburger celebrates its 20th birthday I bid you all "Bon Appetit!" for your next visit to the golden arches.
Posted by A Modest Scribler at 2:00 AM

No Mickey "D"s for this guy. Haven't eaten one in 20 years probably longer. Probably added 20 years to my life.....