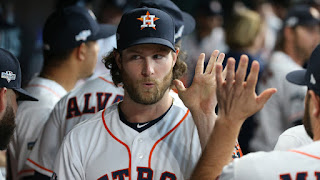 In the 1960's only two professional baseball players made $100,000 per year......Mickey Mantle and Willie Mays.  (Prior to that only Babe Ruth and Joltin' Joe made that kind of money).  Mickey and Willie were worth it.  Every year they were Triple Crown candidates.  Sadly, once the two greats showed symptoms of decline they were retired or shuffled off to hawk beer or breakfast cereal.

In the Mantle and Mays era one could take his kid to a baseball game, order up hot dogs and beer or soft drink, and have enough left from a $20 dollar bill for some Crackerjacks.  Today those same two tickets, and food fare would cost you more than $160 dollars. What has changed since the 1960's?  Baseball free agency.

Hey, as a life long baseball fan I can tell you that free agency was a welcome change from the baseball slavery that went on for the first century of professional baseball.  Before free agency baseball players were just the "property" of team owners.  Until the 1970's the vast majority of baseball players had to take on second jobs during the winter months, so paltry was their pay.  The average baseball player in that era made less than $7,000 a year.  And he had no control over where he might play, nor any guarantees that he'd have a contract the following year.  And, god forbid he have a bad year.  The owner would slash his contract in a heartbeat.

Consider the Los Angeles Dodgers' dynamic duo of Sandy Koufax and Don Drysdale; two Hall of Fame pitchers who perennially won 20 games, had sub 2.00 earned run averages, and mowed down major league hitters with regularity.  So, in the mid-60's Drysdale and Koufax had a brilliant idea.  They would jointly hold out until the Dodgers offered them a hundred grand a year.  Well, after a prolonged holdout Koufax got $90,000 and, as I recall, they bumped Drysdale up to $65,000 or so.

As baseball fans know, everything changed with the Curt Flood challenge.  The courts ruled that no baseball team can ever own human beings.  That ruling was further reinforced with later court rulings.
The first beneficiary of free agency was the great Jim Catfish Hunter, for whom the New York Yankees shelled out $160,000 or so for a long term contract.  Other stars began receiving similar rewards.

Then, during the 70's and 80's, a sort of balance was achieved.  Players were finally being paid what they were worth, and owners were still reaping profits.

Alas, no one could have predicted what we see today.  A .220 hitting, average shortstop makes the major league minimum of $600,000 or so.  If he hits .260 he makes millions.  If he can hit .300 the owners open the vault and shell out ten million a year for his services, all of it guaranteed money.  Then there are the superstars......the pitcher who can win 15 games a year, with a sub 3.00 ERA, or the hitter who can get a hit once in every three times at bat, club 30 home runs, and drive in a hundred.  For that talent, that would have seemed mediocre in the 50's and 60's,  owners sign them up for a decade and fork out hundreds of millions.  Are they worth it?

Let's just look at his week's signings.  Pitcher Stephen Strasberg, hero of this year's World Series, has never won 20 games in a single year, has never stayed healthy enough to pitch 200 innings, yet was able to opt out of his 25 million per year contract and sign one with his Washington Senators for $245 million over seven years.

How about Anthony Rendon, the Washington Senators third baseman last year.  The Angels just inked a deal with him that pays him over 35 million a year or seven years, all guaranteed....even if he suffers a career-ending injury.

Ah, but the most insane contract belongs to former Pittsburgh Pirate and Houston Astros's pitcher Gerrit Cole.  Prior to last year Cole was a mediocre, average pitcher.  Then he had a good year with the Astros.    So the mighty New York Yankees came calling.   And they signed him up for a $345 million dollars (yeah, that's a third of a billion!).

I can think of only a few "civilian equivalent" to the baseball madness that occurs today.  The only rivals to these overpaid, underperforming baseball jocks are the Chief Executive Officers of our corporate giants, Wall Street traders, and politicians who always seem to enrich themselves on the taxpayer's dime.

Take a minute or two to mourn for Yankees fans.  They're gonna have to shell out $200 bucks for a couple of nose bleed seats to pay Gerrit Cole's salary.  And they won't even get a box of Cracker Jacks out of their change back.
Posted by A Modest Scribler at 2:00 AM