No Gold, Frankincense Or Myrrh Required 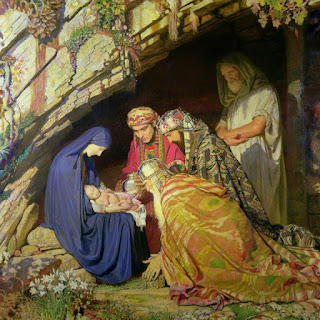 I had a little difficulty yesterday, trying to avoid the bumper car world of lies, exaggerations, personal attacks and general savagery that appeared in the newspaper headlines.  So I googled "Christmas miracles" and was introduced to a story about a Colorado mom whose heart stopped beating as she went through labor.  Fearful for the unborn child the doctors performed a C-Section and removed the infant, its skin already tinted blue from lack of oxygen.  Once the child had been stabilized they wrapped him in baby blanket and placed him in the arms of expired mother.  Then somehow, and not a little a miraculously, the beating heart of child awakened the heart of dead mother.  Both mother and child survived their ordeal without any enduring ills.

After reading that I sat there at my desk, thinking about all the wonderful things that happens to we humans, the most spectacular of them being written about during the Christmas season.

In fact, if we really stop to look around us, we can see gestures of goodwill that better another's life nearly every day.

So after reading that wonderful little story I ventured up to my local grocery, to replenish the eggs and bread and lunchmeat stocks.  And since my mind was more closely attuned to the human activity going on around me, I saw a produce clerk run to the back and pluck a more appealing head of lettuce for a woman who had looked sourly on what was stocked out front.  In a grocery aisle I saw a tall young man reach up and grab a jar of spaghetti sauce for an elderly woman who was too short to reach that top shelf.  Then, as I checked out, I waved the woman behind me, dressed in medical garb, holding a single bottle of juice in her hand, to go before me at the register.  I usually do that with anyone who has less than me in hand or cart.  I figure I'm retired and have more time than the working and harried.  Finally, as I walked out to my car in the parking lot, I saw a store worker wave off the offer of a tip from a lady who he had assisted in loading her groceries.  I'm sure the acceptance of tips is frowned upon by the grocery store.  Still it was both comical and touching to see how vigorously that young man waved off a tip, as if that dollar was tainted with arsenic.

As I drove home I began to think how,  no matter how modest the gesture, goodwill can be spread among men.  Just as sprinkling  a little sugar and cinnamon will make an apple pie more tasty, we can sweeten the lives of those about us with the smallest kindness.  No miracles and no gold, frankincense, or Myrrh required.

Merry Christmas, people.  May you be showered with the smallest of miracles during this Christmas season.
Posted by A Modest Scribler at 6:08 AM

I have found myself in a MUCH more caring state of mind in my older years. Although I've always held a door open or given up my seat as my natural tendency, I in these times find myself extremely sympathetic to what's happening here in California.People with signs, Homeless etc. most of the time get my attention. I'll give $10 here, even $20 to a Indian Lady with her3 kids and a dog, took a Homeless Lady to breakfast with me the other day. Not looking for accolades. I get rewarded with an inner peace that makes me think that all those years I worked hard ow has some meaning. If I ever win the lottery, I will be incorrigible. Walking down the street with $100 bills, can't imagine the good I could do. Merry Christmas and Happy New Year, Scribe. I enjoy agreeing and disagreeing with you.

Frank, I feel a bit sorry for those who can't bring themselves to be charitable. One learns by giving that both the giver and receiver are blessed with wonderful feelings. Merry Christmas to you and yours as well.