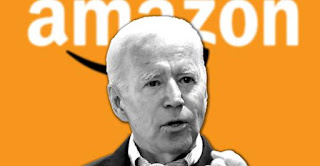 On Wednesday Crazy Joe, in an effort to cater to the far left, says he will propose a minimum tax on giants like Amazon and Google, et al.

This "Carnival Barker" and his liberal ilk just don't get it. If Amazon had never expanded from just selling books, to selling everything under the sun, they would not be employing hundreds of thousands of workers. Had they not plowed their profits back into Cloud Services, hundreds of thousands would be seeking work elsewhere. And it is not even true that they pay no taxes. They pay out billions to the states in sales taxes, they pay into the Social Security Fund, and in those years when they are not investing in other businesses they pay out billions in federal taxes. Last but not least, were Amazon not as successful as they are, their stock holders would never be forking over billions more in capital gains taxes!
Putting onerous taxes on businesses whose existence creates jobs, enrich lives, and generate government income will destroy what America does best.
But the "Carnival Barker" lies sound nice to the liberal lemmings who will never, ever get it.
Posted by A Modest Scribler at 2:00 AM

Don't understand why these Corporate heads support the Greedy Democrats. Guys like Bezos should know that the Dems see him as a Golden Goose, nothing more. A "Useful Idiot" as it were. Same way with the Jews. Warren wants to "Quid Pro Quo" Israel. Are you freaking kidding me? Dumbs are doing everything they can to attack and people just stand there and take it. Sad.

His former boss kept the US corporate tax rate the second highest in the world, resulting in hundreds of billions of corporate profits being parked in off shore accounts, unreachable by the IRS. It seems pathological with the Democrats, this idea of class warfare.

I'm starting to have to respond to multiple comments since Google Blog starts converting me to "reader only" status quite often. Frank, I don't get Bezos either. If not for Bush he'd still be hawking books only. Your comments on the more general Dem policies need nothing further from me. I just take their political philosophies as a form of madness.

Randy, as is indicated this morning with the huge job gain numbers, we as a nation just need to not have Dems in charge. Hello a blowup doll in the Oval Office; one that just leaves American business alone is better than anyone the Dems are offering.