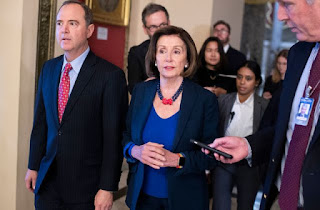 This week the Democratic controlled House will vote for impeaching the President. The straight party line vote will no doubt end up voting "for", thus setting up a trial in the Senate.
Once the Senate trial begins the Republican controlled Senate will have two options...........either take basically a "guilty or "not guilty" straw poll, to see if 67 Senators vote "Yes", or stage an extended trial, each side allowed to call witnesses.
Though both Majority Leader McDonnell and Trump's defense team wants quick procedure, the President has said he'd like to have an extended trial. He wants his defense team to issue summons to Barack Obama, Hillary Clinton, Adam Schiff, Nancy Pelosi, and Biden and son........that they might all be grilled on national TV, just as his staff has been.
I'm all for that. In an age where guilt by accusation is society's "modus operandi", I can think of dozens of the Democrats's missteps and coverups over the last decade. A trial like that might be cleansing for our nation. Alas, chances are the Senate and Trump's lawyer will prevail and January's impeachment trial will be quick and dirty.
The Democratic party is unique. Though they already know the outcome of their impeachment efforts they went ahead anyway. Why? Because they lost in 2016, took a look at the pitiful herd of their own 2020 Presidential candidates, and decided to "play the lottery", hoping their numbers come up. With such long odds a reasonable person might not go out and purchase a Rolls Royce as they wait for the lottery pull. The Democrats are doing exactly that.
And we might also note that nothing in the Constitution precludes the Democrats from starting another impeachment effort as soon as this one is over. (God knows next November's election is looking dismal for the Dems.) They might label the next impeachment efforts "Impeachment, Part Deux" and call on Adam Schiff to do a better job next time in writing political fiction.
Mon Dieu!
Posted by A Modest Scribler at 2:00 AM

On one hand, I am exhausted from all this impeachment nonsense and think it should end quickly. Of course, then the democrats will start another maneuver to take it's place. Maybe Trump is right and he should get a chance to state his case. Drag everyone in DC through the trial and tar & feather all of them. The opposition delights in making him squirm. Quid quo pro. By the way, why hasn't Robert De Niro been arrested for threatening violence against the President on an almost daily basis?

"Tar And Feather". I like it, Jeff. As to why old Bobby D doesn't get arrested for terrorist threatening, well he's just one of man Hollywood elites who have done so. The gated community crowd get a pass.

I'm far too cynical to believe the political elite will ever be the subject of actual judicial proceedings. Three years in on Trump's watch and no Democrat or bureaucrat has been arrested or charged with anything. No, end this farce on a party line vote (knowing full well Romney and Collins will side with the left), let the Democrats claim the Republicans put party over country, have Trump turn this around and use it to hammer the Democrats as weaponizing impeachment for political gain, and bring on November. BTW, just as Reid changed the Senate voting procedure to benefit Democrats and now is making it easier to place Republican judicial nominees on the bench, the next Democrat President facing a Republican majority House will be simply because they have the votes.