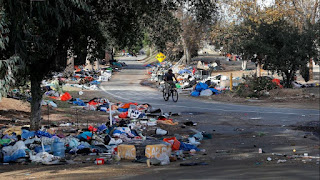 Over the last two decades California has managed to formulate revolutionary new means to deliver the gravy bowl to homeless folks.  It is now possible for a homeless person to stake out a rent free spot of sidewalk on Main Street, all the while collecting welfare and food stamp checks and Medicaid cards.  Just send the goodies via General Delivery at the local post office.  Funds received can then be used to purchase booze or drugs.  No onerous apartment rent, or utility bill,  to get in the way of whatever dependency one is enjoying.

California's major cities, drowning in homeless shit and drug needles, have decided a "get tough policy" is needed.  The cities of Los Angeles and Sacramento have committed tens of billions of dollars toward building new homes for their ever growing homeless ilk.  Once built these brilliant pols will then demand that the homeless move in to their rent free homes.....or face the consequences.

Except the politicians won't say what those consequences might be.  Unused to enforcing the rule of law, I'm sure municipal and state officialdom will have to convene various committees to decide how they'll handle the miscreants.

Perhaps the homeless are a bit smarter than their municipal leaders.  For example, in the last few years, the drunks and druggies have learned how to monetize their free nightly motel and hotel vouchers.  They simply turn those vouchers over to a tourist scalper for half the value, whereby the scalper sells the motel vouchers to out of state tourists suffering from a tight vacation budget.  Brilliant!

California's new governor has opened a second front on the housing war.  He has ordered city leaders in California to build homeless housing.......or face denial of those cities' share of state taxes collected.  Guess Governor Newsom never checked with Detroit or Chicago or Baltimore about ghetto building.

I'm no rocket scientist but I gotta feel that California's new homeless strategy.........building homes for free, will only lure more homeless to the La La Land that is now California.

Posted by A Modest Scribler at 8:25 AM

You are correct. Many, if not most, of these bums want the lifestyle of living on the street. The authorities cannot force them into housing, so perhaps the goal here is to funnel tax dollars to union trade groups. They are in CA for the weather. Try that in Chicago in January and you won't survive.

Never saw a single homeless person while stationed in North Dakota. If I were homeless I'd spring for a plane ticket to Honolulu.

Homeless in Honolulu. Great title for a song. Now write the words, Scribe.