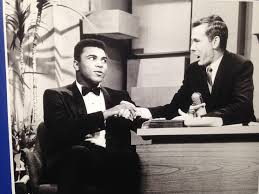 Each night, at 10PM, I turn to one of my retro channels and watch re-runs of Johnny Carson and his Tonight Show.  I can always tell the year the show was recorded simply by listening to Johnny's opening monologue.  Those were things of beauty.  Johnny would mix in general humor with side swipes at both political parties.   It was not until many years later that I learned ol' John was a social liberal.  (Whew!)

When asked why he didn't talk about his personal politics Carson said he'd be a fool to offend half of his audience.  Wise advice.

Contrast that with our current late night hosts.  First of all you can scrap the humor.  There is none.  Those shows are packed to the gills with an hour of liberal snark, most always to the detriment of President Trump.  And lest they offend their liberal ilk, they never attack a political liberal.  Wouldn't be "prudent", as George H.W.  used to say.

I find these later talk shows just soul deadening.  If there is even an attempt at humor it is usually aimed at the latest round of societal targets.........those folks who have already been beaten up unmercifully by social media.  That form of "ganging up" just shows how cowardly the "two Jimmies" and their fellows are.  They dare not call out anyone who has not yet been assigned a crown of thorns.

So I watch Johnny.  And a lot of dead celebrities.  Sometimes I gasp as Johnny makes a joke about gays, or cross dressers, or loose ladies.  Sometimes I watch as Carson jokes about cleavage, or general sexiness.

Carson did the Tonight Show for 30 years.  Did it well.  Made us laugh back when little offended us....when we had our sense of humor intact.

Today we are an easily offended, serious-minded nation where nearly every attempt at humor must be narrowly defined.

Johnny wouldn't survive a month in this barren desert of political correctness.

What a great idea! Not a whole lot to watch on the boob tube lately. Such garbage! And watching an old show like Johnny will be quite entertaining just for the fact that so much has evolved in our world since then. You could drown in the 'political correctness' nowadays. Makes me rather ill with all the snowflakes out there and their hurt feelers! I'll have to give this show a whirl very soon.

It was a treat when my folks let me stay up late to watch Johnny Carson. During the entire run of the Tonight Show with JC, only three times was the first guest brought out and was so popular, that was the only guest on the program. I saw the show when Chuck Barry was one of those guests in the mid 70's. Fast forward to 1999. We were stationed at Scott AFB on the Illinois side of St. Louis. There was a huge nightclub in SL called Blueberry Hill and Barry, a SL resident, performed in a small underground theater once a month in that club. So, myself and a friend went to see him. Standing in line waiting to go into the theater, I saw Chuck Berry eating dinner before he went on. I walked over, introduced myself, and told him that I saw that show where he was the only guest. He laughed and said he hadn't thought about that in years. He asked me to sit and I was lucky enough to have a talk with a rock legend. Carson was the best. I do not bother with any of them now. Just garbage.

Randy, I too enjoyed those shows where Carson devoted a whole show to some icon, or for some special interest. For a few years there Paul Erlich and his book "Population Bomb" commanded Johnny's time often. (Though Erlich was proven wrong). My favorite extended guest was Carl Sagan. Loved how he explained our universe to us. Finally, I liked that Johnny was wiling to preempt someone back in the green room if what he had out front, before the cameras, was working. He may have pissed a few green room celebrities off but, with Johnny it was all about what was working for the audience. His interview with Mike Wallace and 60 minutes was fascinating.......gave us real insights into what a very private man was all about. One last note; don't know how I finagled my mother into it, but all through mid-60's high school years I watched Johnny nightly. Thought he was the coolest thing on TV.

Merry Christmas to you as well !