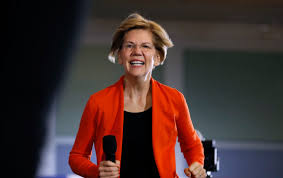 Just read this morning that Presidential candidate Liz Warren is ready to cut her Medicare For All plan by a cool $15 trillion dollars. Liz now says she has a plan to provide medical freebies for a mere $2.5 trillion a year.
Well any of us who passed eighth grade math knows that her annual Medicare For All budget is exactly $2.5 trillion more than the government now takes in every year. Assuming Liz wants to implement her plan, that pretty much leaves nothing to spend on what we are spending today. Stuff like national defense, Social Security, Welfare, food stamps, education, et al.
Liz says she has plans to make up for that $2.5 trillion dollar annual deficit. Says she'll cut payment to doctors by a third. I ran the numbers on that and it looks like doctors would have to pay for their office staff, the lease on their building, comply with government mandated health record laws, and fork out $150,000 a year in malpractice insurance while being paid $40 bucks per doctor visit from Medicare.
Quick! Everyone raise their hands. How many think doctors (especially those paying off eight years of student loan debt) will say in business and how many will retire and go to work as a cashier at Walmart?
Liz also wants to pay hospitals less. While I think that's a good idea, she might want to take a look at how many hospital emergency rooms have driven hospitals into bankruptcy since ER's became the plan of choice for illegal Mexicans. Any more cuts and you can expect more hospital closures.
Ironically it is the government run hospitals that cost the most, with non profit hospitals coming in second, and for profit hospitals costing the least! (In California you'll pay a thousand bucks more per night in a government run hospital than one that is privately owned). That doesn't say much for a government run healthcare system, does it.
Leaving doctors and hospitals out of the equation, Warren's plan gets even more ditzy. Her wealth tax was made unconstitutional by the 16th amendment so that 1 percent wealth tax is out the window. That leaves basic income taxes on the wealthy. Since the top 1 percent of the wealthy are already paying 87 percent of all taxes Liz is gonna have to sock it to the middle class to come up with the $25 trillion ($25 trillion!) she needs over the next ten years on her "bare-boned" new plan.
Well I passed my eighth grade basic math. The only way Liz Warren funds "Medicare For All" is to revive Barack Obama's death panels..........those appointed folks who were supposed to let anyone over 65 die in their rocking chairs.
Politician........heal thyself.
Posted by A Modest Scribler at 2:00 AM

Boy,do I hope she gets the nomination. Your article ALONE will be enough to defeat her. Like you,Scribe, most(at least anyone not a Democrat) people in this Country are smart enough to see the disaster in her plan. Trump is salivating at all these Dummy's thinking we'll buy into to their "FREE" Idiocy. Just look into the statement "nothing is free, someones got to pay" and there you have your slogan for 2020 election. A bigtime Democrat called the field "weak". I say he gave them too much credit. I'm not buying into this "Robin Hood" mentality and neither will the people. Should be an easy win....

Unless something dramatic happens, Frank, I can see an awful lot of moderate Democrats and Independents considering mass suicide. (We know they won't threaten to leave the country........that was promised before and didn't materialize.

My wife is a surgeon in private practice. She opted out of Medicare (and Medical) because of the low reimbursement (around 40% of her rate). Private insurance pays between 60-80% of her rates, so anyone who tries to tell you private insurance "adds no value to healthcare" is ignorant of the facts. You are spot on about hospital closures and provider retirements. Rural hospitals across the country are struggling to survive and this woman's idea to cut hospital reimbursement will accelerate that trend. Then where are those folks supposed to go? My wife is 61 and surgery is physically hard - standing on her feet for between 4 - 10 hours. She tells me if this scheme is implemented, she retires immediately, because there is no way she will see her patient load increase while having her pay cut by up to 50%. And the wealth tax is unconstitutional. Art. 1, Secs. 2 & 9 specify how direct taxes are to be imposed. Net worth is not a criteria. We had to amend the Constitution to tax income, so the idea government already has the authority to tax wealth is wrong. Like Frank said, I hope this woman is the Democratic nominee (although I believe Biden will be the pick simply because he's a known quantity). She presents the voters with a stark choice. Trump should win assuming the economy stays good. But my crystal ball is no clearer than anyone elses.