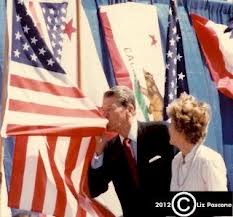 More than two new generations of Americans have been born since President Ronald Reagan took office. Nearly forgotten now was the mess America was in back then, both spiritually and financially. It now seems incredible to contemplate Reagan's inheritance of Jimmy Carter's 20 percent annual inflation rates and mortgage rates at 16 percent, making home buying nearly impossible for two thirds of our citizenry. President Carter made a national address, warning us that the world was running out of oil and any American who denied that fact was both ignorant and selfish.
On the foreign front the Russians considered Carter a lightweight and Iran was holding American hostages from the American embassy in Tehran.
President Reagan promised he would restore our military to full strength and, were our hostages not released, would bomb Iran into the stone age. On the first morning of Reagan's presidency the Iranian hostages were released. Those Iranians knew Reagan was sincere in his threat.
It would take President Reagan more than two years to wring inflation out of the economy, implement policies that spawned the growth of new business (Walmart, Home Depot, Apple and Microsoft are just a few of the new American behemoths that got their start during the Reagan years).
Perhaps most important was what President Reagan did for our national morale. In enjoying low unemployment, and stable interest rates, and our new national pride around the world, we all felt that our futures were indeed golden again after the miasma of the Carter years.
In 2016 we elected a far less moral, less articulate man that the one who took the helm in the spring of 1981. America elected President Trump because they had an almost intuitive sense that America was headed in the wrong direction. Weary of wishy-washy politicians, and social designing Democrats, the American people shook the dice and rolled them.......saying "Trump cannot be worse than what we now have".
And on this first day of 2020 we know enough to see the results of our last electoral efforts. Though the way has been more stormy than we'd like, we do have two new conservative Supreme Court justices, we have an economy rolling along at 3 percent GDP growth rates (something Obama could not achieve in his entire eight years), low interest rates, we have the lowest unemployment rates in more than half a century, we are now the world's largest oil producer (take that Jimmy!), we have a China on notice that America is no longer the whipping post and discount outlet for their prison made products, we have nixed that horrible Obama Iran deal, and, despite the Left's best efforts, we have a President who is serious about enforcing our national borders.
In 2020 we will have to decide between "Morning again in America" or a transformational change to a socialist state.
No one knows what we will become. Our future will be decided at the ballot box, the large national question being "are there enough morning believers? Or will they stay home on election day and witness the election of a political party hell bent on confiscating our guns, our wealth, and, most important our constitutional freedoms?.
2020 will be the watershed year when we decide who we are and who we want to be. If the "morning people" stick together, and gather at the polling stations, the horizon is infinite. If, offended by a less moral and less articulate man than President Reagan, and we stay home, we will witness a socialist transformation not seen in our 220 plus year history.
As it always has been, the decision is ours.
Posted by A Modest Scribler at 2:00 AM

This campaign will be unlike any ever before. The Democrats are desperate to return to control, and their strategy is already obvious: Trump is unfit for office, so either you vote against him, or you hate America. This is a continuation of their NO TRUMP mantra we've been hearing since the day he took office. Their obvious problem is their platform, regardless of whom they ultimately nominate. Tax increases, amnesty, socialized medicine, gun bans, and more taxpayer-funded government freebies is what they intend for the country. If, and it's a big if, the economy stays strong, if Trump continues to succeed in remaking the ridiculously unfair trade deals, if he continues to deliver what he can on his promises despite a Congress intent on stopping him, it is his race to lose. If any of that changes, putting progressives in control of government (including both houses of Congress), begins a very black period in America.

Randy, the best thing Trump could do toward winning again would be to shut down his Twitter account.......and rant less. He has the bonafides to win, even if he muzzles himself just a little.

Lot's of people say that same thing about Trump's Twitter Account. I disagree.It serves a few purposes. One. It's his opportunity to speak to the American people without needing the anti Trump Media that twists everything he says and does. Two. It shows people he's a "regular American". One of us, as it were. Yes, social media is a lot different today. But he's able to talk directly to us. Something I never saw Oblama or Bushy do. Three. It's an outlet for him. His frustrations and anger over what the Democrazys are doing must be intense. Great article Scribe. Spot on. We're in deep dodo if Crazies like Warren or Sanders gets in power. Civil War again just might be a reality....