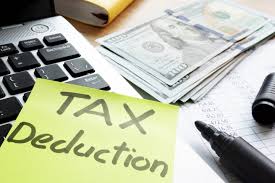 A bit of good news for us......bad news for taxpayers in high tax states. Last Monday a U.S. Circuit Judge ruled that revised 2017 tax laws are valid, specifically the $10,000 dollar annual limit on state and local taxes you are allowed to write off on your federal returns.
To refresh the memories of you peons living on less than $100,000 dollars per year in income, the new tax law said if you live in a high tax state, and state and local taxes, including sales, mortgage interest and property taxes, is more than $10,000 clams you no longer get to write off the extra taxes and have America pick up the tab.
For years highly taxed states like California, New York, Maryland, New Jersey, Illinois and Connecticut had no qualms about raising your income and property taxes since they knew their wealthier citizens wouldn't bitch, but just take a write-off on their federal taxes.
That all stopped with the new tax laws. And since 2019 was the first year the wealthy citizenry began to feel the pain not too much fuss was raised.
Then those folks sat down and did their taxes this year......and realized a hard and painful truth. Unable to have Uncle Sam pick up their state's expensive tab, they are now bitching in their state capitols and demanding state government quit spending like drunken sailors. Nearly as many are fleeing those high tax states. After all, the average Joe in a sanely managed state never comes close to that $10,000 dollar ceiling. For California that's the Silicon Valley boys who once told Sacramento "spend away....we'll write our portion of the tab off on our federal returns."
So, today, those big spending states are in a tizzy. They thought they could find a liberal judge who would throw out the tax law. Well today that federal judge said "hey, the federal government holds prominence over federal tax law. If you wish to adjust your own taxes to suit your state's specific needs, have at it." Bottom line: the Judge told the big spenders that America was tired of picking up the tab for those states who cherish obscene spending.
Glad. Damned Glad
P.S. For those big spending states, governed by the Democratic party, we average stiffs are a bit curious. We thought you only cared about the poor working stiff. How is it you are fighting in the courts on behalf of millionaires? Could it be because you really love those wealthy "2 percent" paying 70 percent of all taxes?
Posted by A Modest Scribler at 2:00 AM

This tax change cost me almost 12K in a tax increase verses 2016 (CA resident), but I'm not complaining. What's curious is that more libs in CA AREN'T complaining about this. The message to the Sacramento parasites is crystal clear: Keep increasing taxes. You won't lose your job.

Don't hold your breath, Randy. Things like this take time to fester. There will be protests and Hollywood bellyaching. The only thing I can say is wait and see what happens if a Socialist gets in power(a real one like Bernie not these fake ones that most Dem Candidates are). You'll see the Rich flee this Country so fast, your head will spin like crazy. And there are many Countries that would welcome the Wealthy into their Country instead of the Poor, for obvious reasons. And the sad part is, the Dems won't learn a lesson. Robin Hood can't be deterred. Dummies.....

Randy, I wonder if there's not more "silent protest" from the rich liberals. Maybe they are afraid of being laughed at if they dare complain about their higher taxes. I still believe in market forces and greed and that leads me to believe that, at some point, California solons will start feeling the heat for their lavish spending. From California friends I've talked with I'm even hearing of a little downward push on housing prices as those higher mortgage interest and taxes are no longer subject to a federal write-off are causing a little push back on those astronomical housing prices. With respect to the wealthy, you are right. The toney class can set up residency anywhere, spend a big hunk of time in the U.S., then retreat to their tax havens.

The rich aren't leaving, according to the reports. The upper middle class is, in droves. The cost to rent a U-Haul to go into CA? About $200. The cost to rent to leave the Bay Area (including the approximately 2-3 week wait time)? Over 2K, and that's not a myth. Two friends moved their families out of state the past 6 months and they paid that much and had to wait about 3 weeks. If you look at how skewed the CA income tax structure is (the top 10% of wage earners pay almost 90% of the CA income tax), you can see the pols really don't care if the middle class exits the state. As the poverty rate grows and more people go on public assistance, I wonder if/when it will ever result in a change. As long as the Dems are reelected cycle after cycle by the voters in veto-proof numbers, nothing will be any different.