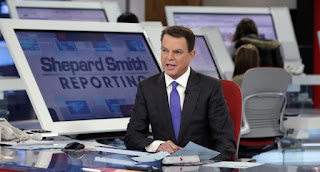 I was not surprised by Fox News "Reporter" Shepard Smith's dramatic announcement on his retirement Friday afternoon.  The man has always been something of a drama queen.  I can still remember when Smith got his spanking new studio, with the two dozen large screen televisions, as if large flat screens made the news more palatable.  Smith walked about, touting the degree of his leverage in being able to get Fox to spend millions for a family of TV screens.

It wasn't just the visuals that turned me off on Smith.  The guy seemed to need a thousand words to report what could have been related to us in a single 200-word paragraph.  Smith was a genius at creating a little extra drama whenever a disaster occurred.  You could almost see Smith's butt squirming in his seat as those googly eyes teared up on cue to every disastrous societal mishap breaking in the news cycle.

Though I didn't care for Smith's style, it wasn't even that that prompted me to switch stations whenever he was on.  It was the grand pretense that Smith was an objective journalist.  He was not.  He was just one of the other hundred or so talking heads today who had no problem injecting his own personal biases into a news report.  How his colleagues, or any viewer could consider him a journalist is beyond me.

Look, most of us knew that Hannity, or Carlson, or any of the other Fox commentators were just that.  They made no claim to be journalists.  Shepard Smith placed himself above them, claiming to be above it all.  Well, you're not above it all if you express personal opinion as you report the news.  (If you want objective, look to Bret Baier.  I still don't know his politics.........and that's a good thing.)

I was a bit taken aback by all the hosannas thrown Smith's way by his Fox colleagues.  I don't know if it was superficial window dressing, or if they really meant what they said about Smith.  And of course we can expect the liberal media to go all "John McCain" on Shepard Smith.  We are all hearing the liberal media praise Smith for being a "quasi-journalist" for a network they despise.  They will no doubt pimp all kinds of conspiracy theories about why Smith departed.  Mark my words, the Dems will have Smith walking around with a halo before much longer.

I have no dog in this hunt.  I gave up watching TV news more than a year ago.  I avoid the mainstream news media as if they had the bubonic plague.  But when I did watch Fox in earlier years I simply could not stomach Smith's "drama-queenness".  Those bulging eyes, the raspy voice, the smug chin up in the air an inch or two too high, was a bit too much for me.  But it was his near orgasmic delight at the first sign of a mass shooting, a bombing, or a Republican faux pas that eventually had me hitting the off button on my remote.

Though I did not see his final broadcast, the news reports said Smith revealed that, due to a non-compete clause in his termination agreement, he won't be reporting the news elsewhere.....at least for a time, he says.

That's fine with me.  There are more than enough hypocrites in the news media already.  We don't need another one interpreting the news for us.  Uncle Walt, Chet and David, Mr. Murrow.........we really miss you.
Posted by A Modest Scribler at 2:00 AM

Like yourself, I stopped watching all network news several years ago (and talk radio either. Repetitious drivel regardless of who is speaking). I watch local news only, well aware of their inherent bias. The low ratings of news broadcasts should alarm the networks, but they seem oblivious. Perhaps now that the MSM is clearly advocacy broadcast, they simply are unconcerned that viewers don't trust them to be objective. Won't affect me either way. Smith struck me the same way as Schiff - cruising the bar that has no women. IMHO......

Each day I read seven news sites, Randy. I then have to sift through the rubble to find something of value. Sometimes I have to do a little research. That seems to be the only way a rational, thinking man can get by these days.Sad. Damned Sad.