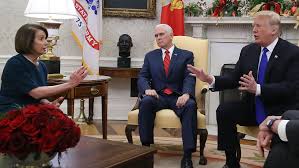 "If I don't see her each day, I miss her
Gee, what a thrill each time I kiss her
Believe me, I've got a case
On Nancy with the laughin' face" (With apologies to Frank Sinatra)
Late last Friday the Democrats released to the press a letter sent to Vice President Pence. The letter, totally unofficial, and sent to Pence only after giving it to the press, demanded Pence turn over any documents relating to President Trump's telephone conversations with the President of the Ukraine.
That rather bogus letter raises certain suspicions. Why would Congress ask for the release of an official transcript that they already have? And why would they try to suck Pence into the controversy? Could it be the Democrats are doing a bit of game-playing? Just in case they somehow succeed in removing Trump from office? Are Democrats shooting for a "two-for" by trying to remove both Trump AND Pence? Of course we all know who would be next in line to the Presidency.............none other than Speaker of The House Nancy Pelosi....who could be a placeholder for Liz and Bernie until one of them takes over the Oval Office in 2021.
Scary prospects but no one doubts the Democrats' talent for long term scheming.
Posted by A Modest Scribler at 2:00 AM

I can think of nothing more repugnant than the words "President Nancy Pelosi". Anyone who thinks this is NOT the Dumbs goal should buy the Golden Gate Bridge from me. I'll give you a large discount.....

Understand your idea, but remember who the Dems are up against. Trump plays hardball better than any Republican I can remember. To this day, there has been no House resolution proclaiming an official impeachment investigation voted on by all House members, and that's not a mistake. Pelosi is terrified of creating a voting record that can be campaign fodder for the Republicans when this charade of an impeachment fails. I hope and pray most voters see this for what it is,a soft coup by Democrats seeking to overturn the results of an election.

We'll have to disagree here, Randy. I believe he'll be impeached, tried in the Senate, which will fail. As to a House impeachment vote it is perfectly acceptable to launch investigative hearings, no matter that they are a sham. But seeing how Dems can't wipe their ass in less than three months I see this dragging out a long time. Have no idea in this era of craziness if impeachment will be a benefit too Dems. I would like to see some good Trump lawyers in that Senate trial. I'd be issuing some serious summonses on the Biden corruption, using that as Trump's defense for urging Ukrainian and China investigations........no matter how he worded those requests.