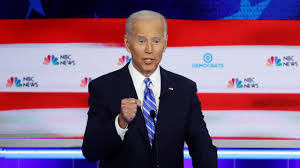 I predicted months ago that, should Joe Biden get into the race, he would stumble his way out of contention.  Oh he may hang around till the very bitter end, but he's bound to say something really stupid, just as he has done in his previous Presidential runs.  In this case it was Kamala Harris, donning plaid school girl skirt, and playing the race card, that did Joe in.  Somehow he had no answer for opposing forced busing of school children, despite the fact that some 70 percent of America also opposed busing their kids ten miles to another school district.

That of course is the problem with Biden.  Not only is he prone to stumble over his words, he has far too much history behind him....history that is as bad as McCartheyism to today's liberals.  It is far better to have done nothing.......leaving nothing behind to offend and defend.

Setting aside all the fringe candidates (they are more than a baker's dozen who would open up Fort Knox and make the "47 percent" rich), I see only a few who can emerge to battle Trump for the Oval Office.  Kamala Harris? Well she'll hang around, mainly because she can play the race card at will...and because Blacks will vote for the devil if he shows up in blackface.  Raul Castro?  Although he experienced a small surge during the first debate there isn't anyone of note who is going to totally decriminalize those who come here illegally.  Bernie Sanders?  Well, let's suppose the 78 year old lives long enough to make it through the primaries.  The only chance he'll have is if one of the other front runners fold.  Elizabeth Warren?  She's rather intriguing.  She speaks well, has a program well defined for every problem and is every Democrat's favorite 6th grade teacher.  Problem is, Warren always comes across as arrogant, as if she's the smartest person in the room and wants you to know it (shades of Barack Hussein Obama).  Except she's got as much warmth as an ice cube.  I just can't see her crossing the finish line.  And, truth be told, there are still lots of folks who see Liz in that Indian headdress.

So who do we have running on the Democratic ticket?  I tell you I just don't know.  Even given the current insanity of the Democratic party, I can't believe the party will give the nod to those who raised their hands for Medicare For All...including 30 million illegal immigrants, who is willing to open the floodgates at the border, or who could rationally explain how they would pay for free college, elimination of two trillion in outstanding student debt, and a 30 trillion dollar green revolution and income redistribution program.

So what will we see by this time next summer?  Will we see the Democrats once again turning to Hillary Clinton?   Will we see a radical Democrat leading Trump in the polls, only to see them lose miserably in November?  Can Democrats convince enough moderate Democrats and Independents to wrest the office from Trump?

I've studied thousands of years of history and I have never seen an era that even comes close to today's politics madness.  Three years ago I hoped I would live long enough to hear a Hillary Clinton concession speech.....and the accompanying moans from liberals and their liberal media pals.  Today I'm just hoping I live long enough to see how all this plays out.    It is a nightmare as full of fascination as anything I could ever imagine.

I see your crystal ball is no clearer than most. Concur with your assessment, but would only note the following. There are a few common characteristics the entire clown car appears to agree upon: Some version of governmen-paid healthcare to be made mandatory for the nation, a plan to make the illegals infesting the nation legal citizens, and tax increases (though the gamut of how and whom is to pay is mind boggling). There remains a year to go and that is a lifetime in the political newscycle. We shall see. Reminds me of the old Chinese curse: May you live in interesting times.

Randy, my crystal ball is cloudier than most. I haven't a clue as to the outcome of this political train wreck. Love that Chinese proverb. And couldn't be more accurate.