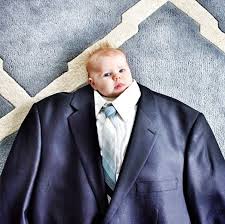 Oh lord, let's get this out of the way first. Again we have Trump achieving something favorable, but wrapping it up in an amateurish manner and, as Obama did with Bin Laden's death, taking credit as if they were both on the ground, assault rifle in hand.
President Trump stood at the podium this morning, looking for all the world like a child dressed in adult clothing. Desperate to talk about something positive for a change, Trump went into operational detail that might jeopardize future clandestine military operations. (Example: revealing out military teams broke through walls in lieu of going in a potentially rigged main entrance.)
During Trump's brief he was like a kid getting a new toy at Christmas. He spoke about that raid in wide-eyed wonder, gushing about watching the operation as if "it were a TV movie", to use his own words. Trump then took the time to squeal about operational details that did not need to be disclosed, lest our military is put in peril in future operations.
Professionals do not do that. I could just see our joint chiefs of staffs cringing in their combat boots as Trump gushed out those operational details.
All of the above is just opinionated window dressing. What really matters is that the death of Baghdadi doesn't mean a damn thing. Whether it was Bin Laden or Baghdadi, the death of a Muslim terrorist leader means very little. You smash one cockroach and a dozen come along to take their place. These terrorist chief executions just give politicians a half hour of victorious face time with the electorate. Trump is no worse or any better than Obama before him in soaking up credit for what our great military achieves. The only difference between Obama and Trump's "crowing" was that Obama acted like he'd done it before while Trump was spiking the ball in the end zone and twerking the fans in the stands, shoulder pads pitifully missing.
Oh well, Trump's "rooster time" press conference this morning will give the Sunday morning talk shows something to talk about besides impeachment.
Okay, boys and girls, quick! Who feels safer that a terrorist chief got hisself blown up?
Posted by A Modest Scribler at 2:00 AM

As you say sir, I don't feel any safer this morning than last. I cringe whenever anyone claims the work of others as their own achievement. For 8 years I had zero admiration for Pres. Obama. However I showed proper respect for the office he held. I suppose Trump deserves all the boos he got at the Nationals game last night due to his crowing about how great he thinks he is. I wish we could go back to the 50's where Americans could rally around their leaders when confronting a dangerous world.

Jeff, I agree that it would be great if we could get behind our leaders. It's too bad our leaders are us; braggarts, self promoters, arrogant and ignorant.

Sorry, guys. I don't agree. Trump doesn't have the advantage of the Press being behind him, bellowing out to the world any little accomplishment like Obama did. He HAS to be a self Promoter. He's in a Political race and he has to be the one to tell the world when anything good happens. Watched 60 minutes last night and that the first time I've heard any "News" story(besides Fox) telling the world about low unemployment and booming economy. Plus they "grilled" Biden with some pretty tough questions. Must not be their favored Candidate. So,to reiterate, Trump had an opportunity to beat his drum Nationally and he took advantage of it. He's got an election to win.