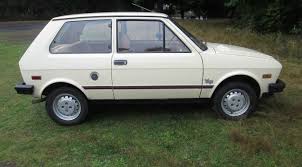 $300,000 For a YUGO?
How many of you would be willing to pay $300,000 for the worst car ever made, the infamous Yugo? That seems to be what the teachers's union across the nation are striking about, and what they expect of you.
In a K-12 system that turns out 50 percent illiterate students the teachers, none the less, want you to shell out more money to pay them for their inferior product.
All the teachers' fault? No, but they get their share of the blame. In a sense they are bribing the parents. And the parents are susceptible to forking out more dough cause they too aren't doing their part to help their kids succeed. PTA meetings are ghostly and far too many parents aren't grown up enough themselves to impose responsibility on their children.
Watched Elizabeth Warren show up at the Chicago teacher's demonstration this morning. That's not surprising since Liz and her Democratic ilk have been supporting a failing public school system for half a century. They love those union votes!
The average teacher in Chicago starts out at a salary of roughly $60 grand for nine months work, then see their salaries soar to $108,000 a year as their tenure protected jobs become more profitable.
Here in Arizona our private, public and religious charter schools are giving the failing public school system hissy fits. Absent on line instruction and the abandonment of brick and mortar, the charter schools seem to come closest to a free market efficiency.

Beats the hell out of me why Americans shell out Rolls Royce prices for damned three cylinder Yugos with the fenders falling off.
Sad. Damned Sad.
Posted by A Modest Scribler at 2:00 AM

Teachers have been crying "Poor" for as long as I can remember. Gee. How are we going to afford to pay them more money? I know!! We'll raise taxes!!! Sorry Folks, but anyone voting for a Dumbocrat get what they deserve. Don't come crying to me about not having enough money to raise your Family or having both Parents working. The Dumbs will keep raising until YOU stop voting for them. One more thing. Don't Teachers get Unemployment or some such garbage when they are off those 3 months?

CA teachers are either the second or third highest paid in the nation (depending upon which survey you read) at just over $83K a year for 9 months work. In my local district, teachers are complaining that they haven't had a raise in two years despite having a 4 year contract that saw their pay rise 9% total in the first two years. Inflation is negligible. We are bombarded with requests for basic school supplies to be provided by parents. Meanwhile, the district superintendent makes a salary equal to the vice President. Education has become a business. Too bad. I sent mine to a private Christian school and am very glad I did.

Randy, the wife and I added part time jobs to pay for their Catholic school education. It was a good investment; they are all self sufficient adults. As to the school money game I am fascinated by how our underserving school officials come up each year with "school override bonds". In addition to the massive funds the state puts out these professional thieves scare school districts into authorizing school bonds in the tens of millions........for "nice to have stuff" that has little to do with a kid's education. And like so many other states our Arizona kids are dumb as rocks when the achievement tests are administered. One added note: it really isn't about the money. The best schools my kids attended were up in North Dakota. Land of good parents, good teachers, overachieving kids......and for a hell of lot less money.