Will The Democrats Trot Out Congressman Conyers To The Rotunda As They Did With Cummings? 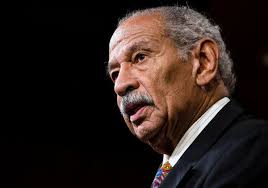 The Democrats must be in a real quandary this morning. Former Detroit Congressman John Conyers croaked yesterday. If you don't know Conyers suffice it to say he represented the Detroit thugville that drew hundreds of millions of dollars from the public coffers to finance publicly built ghettos and kept welfare queens happy.
It was also Conyers who proposed congressional legislation that would have allowed Muslims to ignore our laws and operate under the protections of Sharia law. Conyers also wished to criminally prosecute anyone who spoke against the Muslim faith and culture.
Conyers served in the U.S. House from 1965, until he was forced to resign in 2017, after it was disclosed that he had, over many years, sexually assaulted a number of Congressional staffers. (Prior to his investigation Nancy Pelosi stated "Congressman Conyers is an icon in the House and the accusations must surely be false." As more evidence was revealed Pelosi was finally forced to ask for Conyers's resignation.
During Conyers's long terms in office he got caught with his hand in the cookie jar numerous times. He used both Congressional funds and campaign funds to pay off his various mistresses and to provide for his own luxurious lifestyle. (Not surprisingly, his wife was also charged with taking bribes from various interest groups).
The Democrats loved Conyers........cause they had to. He was Black, he supported endless federal spending, he had an in with Detroit labor unions, and he could deliver the Detroit vote for Lyndon Johnson and Slick Willie and Barack Obama.
So what will the Democrats do this week? Do they dare suffer the slings and arrows of the MeToo Movement to honor him in the House rotunda? Will Barack and Willie and Nancy stand at the podium, ignore Conyers's misdeeds, rewrite history and say what a fine champion of women and Musims he was?
We shall see. The chutzpa of the Democratic party has never suprised me.
Posted by A Modest Scribler at 2:00 AM

Conyers is (unfortunately) a perfect representative of black failure. Despite 25 trillion spent on Johnson's Great Society, where is black affluence? Where are the doctors, lawyers, and engineers? We have rappers, ball players, and a few actors. But the black race remains mired in failure. Conyers was able to stay in office despite what he did, and not because of it. No, the Dems will ignore his death and the media will ignore them ignoring it.

Not only has Black pampering created entire generations of self identifying "victims", it has created a 5th column of people who have little love or loyalty to America. Add in the snowflakes and we've got the seeds of our own national destruction.