"Death By A Thousand Cuts" 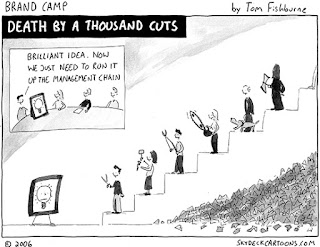 This was written months ago.  The old AC has since been replaced.  And we did get a small pension raise.  But the story is essentially the same:

You read the papers, or troll the online news sites, and you read about some "notable" going bankrupt.  (Johnny Depp, who earned something like a billion dollars over the last decade is a brilliant example).  And when you read that a member of the filthy rich has gone belly up on his finances, admit it, it's kinda "sexy".  And dramatic as hell.

But most of us poor slobs saunter slowly toward bankruptcy in the most mundane of ways.  Instead of being documented in two inch high, screaming headlines on the entertainment page, we who live on fixed pensions, just seemed to be pulled to our demise gradually, kicking and screaming.  We seem to resemble that old Imperial China practice of death by a thousand cuts.

That has certainly proved true for me as I try to survive on pension income.  Please indulge me as I cite the financial autopsy of a pensioner.

When I moved into my retirement community my annual association dues came to $320.00 per year.  And even as some 37,000 of us pay those annual dues, our board masters have managed to double those association fees.  So, I dish out the $600 plus for the privilege of living here.  And then, to keep the county off my back, I chip in $640 dollars for property taxes.

So, pound of flesh extracted from the tax and board masters, I must pay for water, an amount that has also doubled in the last decade.  Even more gargantuan has been the increase in my electricity rates...even with that nuclear reactor 30 miles away.  The gas masters have been more kindly, allocating increases that have raised the gas bill by a mere 50%.

Ah, but if that were all there is.  In this past decade my auto insurance rates have skyrocketed, even as I sit home, demurely, not out creating vehicle havoc on the local roads.  And, even scarier..while I live in the same 1961 home, my home insurance rates have soared because my insurance company says the "rebuild price" is the demon to be blamed.

And, god forbid that my AC breaks down.  When that happens I have to call in an overall clad gent who charges rates for work that would seem to justify a professional education requiring two or three PHDs!  Same for plumbers and bricklayers and handymen.

Need I go on?  Vet bills?  Doctor's bills?  Museum fees?  TV Cable and Internet?  Dream up anything and you'll find it costs significantly more than it did a decade ago.

A decade ago I could buy eggs for a dollar, hamburger for two dollars, round steak for $1.50.  All have doubled in price.

And I live in constant fear that my 2006 Honda may someday give up the ghost and I'll be confronted with the crisis of having to replace it...at a minimum of $25,000 a pop.  I baby that old Honda...it actually has a better "health plan" than I, with regular check ups, following the maintenance schedule religiously lest it rebel and leave me "wheel-less".

Inflation right?  Well how could that be when our Federal Reserve Board declares a 2 percent inflation rate?  Sometimes they say prices didn't go up at all!  Which of course means no increase in my pension because nothing went up in price!  For a few years now our masters who determine retired military pay raises have refused to fork out any inflation raises at all.  This year I received a .33 cent per month raise in my pension.

Well, I don't know how other retirees on fixed pensions manage but, as I went online to my bank this morning, to see if my Social Security check registered as a deposit, only to find my insurance company reminded me that my semi-annual auto insurance was due....and by the way, they wanted their money now! That staggering payment, combined with some eye doctor fees, and my $400 dollar electric bill, just wiped out my Social Security deposit.  And, as I sit here wondering how I'm going to pay for my doggie's $700 dollar PAWS healthcare plan (which also increased), I realize that I'm dying that "death by a thousand cuts".    No, you wouldn't know it....my FICO score is 815, which puts me in the elite 1 percent of reliable borrowers.  But, if they only knew just how high I'm climbing the financial "critical list!"

Ergo, I am seriously considering selling my home, buying a rag-tag old RV, and just go out and dry camp in Arizona's vast deserts.  Kind of "Walden's Pond" with rattlers and gila monsters.  Maybe I could eat rattlesnake and pretend it really is chicken, and learn to sprinkle grub worms over my morning oatmeal.

Pardon me if this little essay is written, not with tongue in cheek, but with a sour taste in my old mouth....which by the way, needs about $5,000 dollars worth of dental work.

Sigh.
Posted by A Modest Scribler at 3:00 AM

I went over this similar scenario recently with my husband. Washing machine went out; homeowners and auto premiums went up over $500 a year; I need $2,000 in dental work; eye exam; work on our dually; the list goes on. On a good note: our HOA fee went DOWN $10/year to $80. Wow. Aren't I lucky?

Exactly, Carol. The list of inflation woes is endless. The only parties able to beat income erosion are those who can most afford absorbing it. And that ain't us.

.
My brother just sent me a photo of a big sign that has a pistol in the middle and this caption:

"Due to the rising cost of ammunition, I'm no longer able to provide a warning shot. Thanks for your understanding."

You might want to make one to post outside your r/v when you move to the desert...