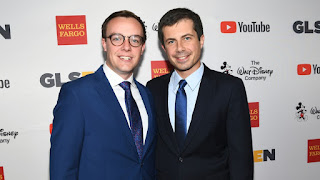 On Friday morning Politico revealed their latest Democratic Presidential polling.  Results show that gay South Bend, Indiana mayor Pete Buttigieg has stormed into 3rd place in national polling.  Should we be surprised that a gay mayor, from a failing city, is climbing the popularity charts?  I think not.  Ever since we elected a community organizer in 2008, then re-elected him in 2012, all to disastrous results, America seems to be hell bent on selecting fringe candidates, totally out of the historic mainstream.

No longer do we choose candidates with political experience.  Or ex-generals.  No, for the 21st Century we seem to be all in in picking the least able and the most freakish.  Whether it was the George Bush-Barack Obama duo who singlehandedly increased that national debt from $4 trillion to $20 trillion in less than two decades, or the less than articulate billionaire who now occupies the Oval Office, America seeks some tasty new dish to spice up the palate.

So will our next President bring with him the "First Man" to select the lacy curtains in the Blue Room?  (Should Pete win election I can already hear his detractors tagging him with "President Butt-Giggle") If recent history means anything good old Pete Buttigieg has a real shot at the Oval Office.  America seems determined to celebrate the "fringe" more and more, and less of the "mainstream".

And what exactly does Mayor Buttigieg bring in the way of political success?  His South Bend, Indiana boasts crime rates that are triple the national average.  More than a third of his city live below the poverty level.  And yet, somehow, Democratic voters have nudged old Pete into third place, behind only Socialist Bernie and Crazy Joe.

And we should never forget that rapper billionaire Kanye West has expressed White House ambitions sometime down the road.  He says he can bring an urban ghetto mentality to the Oval Office and fix all our problems.

Maybe we'll work out a deal where Pete Gigglebutt and his significant other can run things for two terms, then turn over the helm to Kanye and his LargeButt lady.

Sigh.
Posted by A Modest Scribler at 3:00 AM

Isaiah 3: 4-5. "The Lord will let the people be governed by immature boys. Everyone will take advantage of everyone else. Young people will not respect their elders, and worthless people will not respect their superiors." What is happening in the country has been foretold. God used America to accomplish two tasks: Defeat Nazi Germany and foster the establishment of Israel. After that, it was up to us to decide whether we would be a righteous nation or a rebellious one. In 1973, the Supreme Court said abortion on demand was legal. In 2015, the Supreme Court said states could not outlaw sodomites marrying other sodomites. God has been systematically removed from schools, government, and public life. This nation went from being founded, to becoming the preeminent power on the planet in less than 140 years and people don't believe God did that?!?! The freak show on the left is evidence of God removing His blessings and allowing man to be in charge.

Indeed God was there for us in the beginning. How else can one explain the brilliance of our founding fathers.....steeped in the philosophies of Rousseau and Locke. How else can one explain Washington's miracle escape from New York, or his daring Christmas night raid on the Hessians, or Lincoln finding an ex drunkard to win his battles, or a T. Roosevelt who came along, crushed the monopolies and evened the playing field for the common man. Even Reagan's timely arrival indicated the Big Man was still with us. Alas, He has shaken his head in disgust and looks as if he's chosen to walk away.