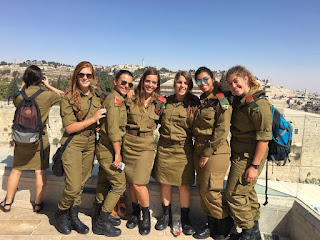 I was watching a group of young Israeli military men and women interviewed this morning. All were between 18 and 30 and were being asked what they thought about their nation's election results.Seems that both men and women supported the re-election of Benjamin Netanyahu. Not surprising since he's pretty much been their leader throughout their childhood.

It was when they begin to ask these young folks about patriotism and love of country that I felt I was entering a 50's time warp. These Israeli young people were so different than our current crop of American snowflakes. The Israeli kids, readily accepting their military commitments, had no doubts about defending their country. One young Israel woman, when asked about the conflict between Israel and the Palestinians, said "it's pretty simple....we both want to live in the same space...and our enemies are not willing to share".

I'm pretty sure that young woman has never been given trophies and blue ribbons for "participation". And I'm pretty sure she avoided the liberal indoctrination our unionized teaching militants administer in the U.S. These Israeli young people were willing to sacrifice for a greater good, willing to kick ass if necessary, then move on with their lives when their military commitments were over.

After watching these young Israelis I couldn't help but think that what we've done to our young is no less than generational theft.......the raising of little lemmings afraid of their own shadow and uncertain about their own futures. They are not the sickest of our society but, sadly, these snowflakes represent the slow circling down the drain of what was once a great nation.

Our nation's greatness has never depended on what we had. One need only look at how we geared up from nothing prior to World War II, then went out and won a world war. No, our greatness always has come from an unwavering fortitude that is now largely absent.

Those young Israelis certainly have it. Sadly, our young are intent on seeking out safe spaces and sucking on the public tit.

More than anything else, your post today hits what I see as the biggest issue facing our nation. We have reared a younger generation that does not prize allegiance to the ideals of the US. Instead, we have young people that are selfish, see only the failures and shortcomings of our past, and focus on irrelevancies such as income inequality and global warming. Unless we are willing to stop the partisan bickering, the split in the nation will tear us apart. The pols simply want the power, so they feed to acrimony and arguments. If the liberal loses in 2020, the prospect for a shooting war goes off the charts. If the !iberal wins in 2020, the split will continue to grow. America, as envisioned by the founders, is done.

Randy, it is unfortunate that most of us knew many years ago that nothing good could come from the wholesale liberal indoctrination of these kids. We knew it and yet held out some hope that, when the kids went out into the real world, they'd get a smack in the fa ce and begin to act and think rationally. That has not happened. And the more they fail to secure a productive perch in society the more they scream income inequality....because the inequality exists....but not because some capitalist succeeded. Instead, they swallow the liberal kool aid in great gulps and become angered at their massive failures.