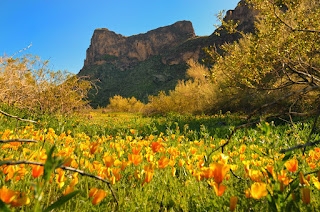 I suspect when Californians filed the wealthy set finally came head to head with their limitations on writing off mortgage and interest on their federal returns. I'm guess that same tax shock treatment was felt in New York, New Jersey, Illinois and other high tax states. Sadly we are seeing the effects of those tax write off limitations over here in Arizona. The local newspaper reported that our own Maricopa County is the fast growing county in the U.S. The paper reports the largest swath of our new immigrants come from California. But Washington state is second, with Texas and residents of eastern states joining the caravan to Arizona.
That's proving true in the rapid rise of real estate prices. In less than five years our two houses went from post recession lows to all time highs. That's good for us but bad for working families trying to find housing they can afford.
The wealthy from elsewhere seem quite dazzled by our prices. Last year Microsoft bought up huge hectares of land just west of Buckeye, where they plan to build a high tech model housing community. And Microsoft corporate just last week gobbled up another 170 acres in Goodyear, their second purchase in that area, where they plan to set down a manufacturing plant and data center.
With all this money flowing the locals seem not to know what to do with their new found lucre. Business is booming, folks are eating out more, attending more concerts, and even Arizona government is so flush they just banked another billion dollar surplus to add to the state's rainy day fund.
Of course our California transplants are saying we ought not be saving that money. That we should give more to the state's "47 percenters" who hold no job but seem to fare better than the average working joe. Those transplants, even as they enroll their children in our dozens of private charter schools, say we ought not to give tax credits to parents whose children attend charter schools. Both those western transplants and the state's teacher's union both agree...perhaps because our private schools are kicking the public schools ass in student achievement.
The economy is also getting a boost from a couple of reliable old sources....the two million snowbirds who arrive every October, then leave every April...and the more than one thousand movies and commercials shot in Arizona each year, owing to reliable weather for filming. Maybe we'll get so big in movie-making George Clooney and Babs Streisand will come over here and straighten us out on our political priorities.
I think when each of our houses hit stupid territory we might have to move out of Arizona. Half of million each for each house ought to buy us a bunker on militia land up in Idaho. I'll sure miss the relatively sleepy Phoenix that was here when I moved here 15 years ago though.
Sigh.
Posted by A Modest Scribler at 5:57 AM

Interesting piece. We're in San Jose, bought 12 years ago, and get weekly cold calls from realtors asking if we want to sell. I tell them "For 2 million dollars, we'll be out by Friday." No takers (yet), but my price is only about 300K too high. We are leaving in 2 years and AZ is one of the potential destinations (NV was on the list, but it is solid blue now.). Real estate prices are insane, but if you can take the appreciation and relocate, you should. Unlike most Californians, I won't be dragging along the toxic liberalality so many of them seem to import. There are many reasons to leave CA (only the weather is a reason to stay), and we are formulating the plan to go. One of my former squadron commanders had a saying: Measure twice, cut once. The meaning is clear - make sure you are doing it right before you make a move. Easy research will tell you net migration has been out of CA for the last decade. Only the high immigrant birth rate has kept the population numbers increasing. And Sacramento wants another 6 billion in new taxes this year alone. No, adios is in our future, and there will be many more joining us.

Yes, Randy, the U-Haul survey says California is winning the out-migration contest, with Illinois running second. BTW, I read that San Jose nows wins the least affordable tag for all of California now. Congrats on all that equity.