Why Dems Are Losing Their Senses Over Census 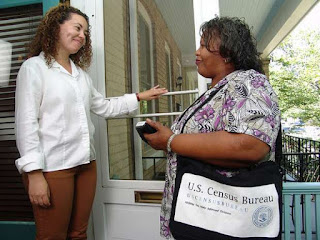 You have probably read about the Democratic Party fight to keep a question about citizenship status off the next census. There are very good reasons why the Democrats are up in arms about our Census Bureau asking that question. But before I get to that let's review a little census history.

Up through 1950 the U.S. Census Bureau always asked about one's citizenship as well as foreign births, and if one were naturalized. In 1960 the question was dropped, then resumed in 1970.......before being removed in 2010, during the Obama regime.

The key reason the question is supposed to be asked is that each state's allocation of Congressmen is based on the numbers of bonafide residents in those states....not population, per se. By law, only residents authorized to be here are counted when drawing up the electoral map and allocating the proper number of Congressmen to represent them. The rest, by law, are supposed to be deported.

Now try to imagine what happens to New York, Washington state, California, Arizona, or Nevada if the Census Bureau determines those states have fewer "legal residents" than the declared population! Let's take California for example....a state that is over-represented in the U.S. Congress....pulling that body as far Left as one can stand these days. Since one Congressman is supposed to represent 700,000 legitimate residents, California, with its 11 million illegals, stands to lose as many as 15 Congressman if the Census Bureau starts to pursue the hard numbers of real bonfire residents...and not dwelling invaders. That would bode equally bad for many other states who are harboring large illegal immigrant populations.

So do you get it now, boys and girls? Do you understand why these sanctuary states are fighting so hard to keep the question of citizenship off the next census? At my last look there were no fewer than eleven states joining together to sue the Trump Administration over putting that question on the next census.

Just heard this morning that the Supreme Court will take up that issue come the June session. Their decision will be critical in determining whether we are to be ruled by law, or whether some 30 million illegal invaders will have a huge say so in how our country is run.