"America Eating Her Own Tail" 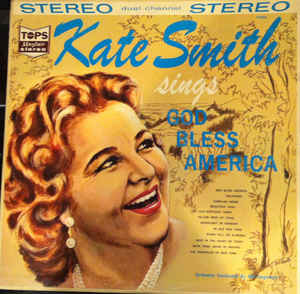 Kate Smith was a rather large female singer who was wildly popular in America in the 1930's and 40's. She recorded more than a dozen hit tunes, none more popular than God Bless America, which she was asked to sing at many events across our land throughout the 40's and 50's.
So it was not surprising that the New York Yankees baseball club had been playing Kate's God Bless America recording thousands of times during baseball's traditional 7th inning stretch.
Then, yesterday, someone easily offended pointed out that Kate Smith more than 80 years ago, recorded a song called "That's Why Darkies Were Born". The Yankees organization immediately banned Kate's recording from ever again echoing off the stadium walls.
Someone was offended. And we must always respect the sensitivities of the offended. Kate Smith's character and reputation are now ruined forever....for a song sung in 1931. This despite her wild popularity with G.I.'s during World War II, this despite her many charity deeds throughout her life. She sang a song about "darkies" and must pay the ultimate price.
That is the way it is in America these days. So that none be offended, ever, we must busy ourselves in eating our own tail. We must judge everyone by today's societal standards and not the one in which people lived.
And what's most sorrowful is that "That's Why Darkies Were Born" was a highly complimentary song about the Black culture's ability to teach Whites a thing or two about living exemplary and productive lives, even in misfortune. Kate Smith was singing about a people who had been so terribly mistreated, yet found the strength to sing, about a people who could find happiness in the simplest of things, someone so noble their faith in their God could drive away the devil. Read the lyrics for yourself and see if you don't agree:
"Someone had to pick the cotton,
Someone had to pick the corn,
Someone had to slave and be able to sing,
That's why darkies were born;
Someone had to laugh at trouble,
Though he was tired and worn,
Had to be contented with any old thing,
That's why darkies were born;
Sing, sing, sing when you're weary and
Sing when you're blue,
Sing, sing, that's what you taught
All the white folks to do;
Someone had to fight the Devil,
Shout about Gabriel's Horn,
Someone had to stoke the train
That would bring God's children to green pastures,
That's why darkies were born.?"
Dear World
I apologize for my country. She has never been more ignorant, so immoral, so stupid and inherently weak as she is just now. You see, she is busily involved in consuming her own tail. Soon there will be nothing left of her. Show a little patience world and you won't have to look upon what was once a great country ever again.
Posted by A Modest Scribler at 3:04 AM

Well said. The absolute consumption by the left with PC is furthering the divide in the nation. I am unaware of the Constitutional right not to be offended, yet it seems that subjective standards are all the rage with the progs. Well, my turn. Sodomy offends me. Cross dressers offend me. Legal drugs offend me. The nanny state offends me. Leftist pols claiming I don't pay enough in taxes offend me. Since I'm offended, I have every right to expect those things to go away, right?

And the greatest irony of all, Randy, is that Blacks can no longer be praised for those song lyrics. They have become the whiniest ethnic group on the planet; imaging offenses that aren't there and carrying a race card that excuses all sins.

Wait...there is a bit of a familiar theme, would a new song be written along the lines of: someone has to pick crops of California, someone has to clean the house, etc. Aren't these some of the reasons we are told that we should be happy that there are people who will do things that American citizens, regardless of color, won't do anymore.

And actually anon, the Labor Department says 75 percent of immigrants are working in high paying jobs, not in agriculture. Many aren't working at all, having learned to game our social services through various ruses. Most agricultural jobs are performed by those here on temporary work visas and supervised by contractors.