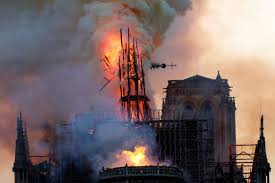 Almost by chance yesterday morning I flicked on the TV and sat stunned, watching that massive fire climb high into the skies. Soon one of the spires crashed down on top of the roof of the cathedral, sending sparks and walls of flame again climbing skyward.
I cannot describe what I felt at that moment. Certainly I felt that old familiar ache in the heart when tragedy strikes. But it was even more than that. It was a heaviness of the shoulders that felt like the collective sorrow of a hundred million souls were resting there.
That collective sorrow hit home when I saw the agonized faces of Parisians as they clasped hands in prayer, or kneeled and prayed for the survival of that eight hundred year old edifice that had survived multiple tragedies, including a great secular revolution in which the French seemed hell bent on destroying themselves.
That ancient church took a hundred years to build and it has undergone several renovations since its first inception. And yesterday morning it was once again under attack, it's ancient internal timbers aflame along the lovely waters of the Seine.
I have never been to the Notre Dame Cathedral. But I've always admired it from afar. Once, years ago, while leafing through a photo book of that iconic cathedral, I was touched at seeing a series of sculptures which depicted various events from the Bible. Seems that ancient cathedral was named the "liber pauperum"; the poor people's book. Those sculptures were specifically designed to tell the Bible story for the tens of thousands of devotees who could not read. I always thought that was such a dear thing to do.....making the purpose of the cathedral truly a "poor people's house".
God bless those first responders who did so much to save lives and rescue many of the art treasures located in "Our Lady". And God bless the French people who have already donated hundreds of millions of dollars to resuscitate the grand lady.
It has been said that a great cathedral, built merely of wood and stone, does not achieve its full majesty until the blood and sweat of sacrifice is invested in a project that won't be finished in one lifetime. Perhaps that's what makes "Our Lady" a stepping stone from earth to heaven.
A building, to be grand, must exemplify so much more than its unique architecture. It must serve as a icon for what the world determines is good. Yesterday, as tens of millions watched and prayed, I could not doubt that "Our Lady" had served that very purpose. For a few hours we were all Frenchman....standing along the Seine, our hearts heavy with grief. Maybe "Our Lady" brought that sentiment home to all of us on that sad day.
Posted by A Modest Scribler at 3:00 AM