Mourning The Death Of Journalism 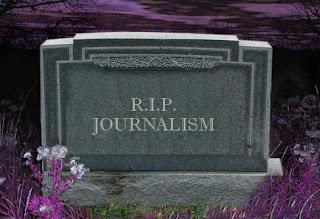 I hit the "go" button on the coffee pot on Sunday morning, then swung open the front door, intent on going out and retrieving the Sunday newspaper. Except out in the driveway was a plastic bagged paper so thin I mistook it for the weekly market trader circular that you find in your local grocer's racks.
Almost turned back into the house to call the circulation department, then thought, while I'm out here, may as well retrieve that market trader circular.
Alas, turns out that bagged newspaper WAS the Sunday paper. Could not believe it. This morning's paper broke all records for tree conservation. Even the Sunday store circulars seem to have taken the week off.
I can remember when the Sunday paper was two pounds of newsprint, with whole sections devoted to book reviews, and movie and play reviews, with a good ten pages of international news supplementing a generous reportage of national and local news.
This morning's paper required only 20 minutes for me to finish reading. And because they no longer care, the editor puts the paper to bed about midnight, so there was no news at all about the Sri Lanka tragedies, nor any overnight crime news. The only lengthy article of substance in the entire newspaper was a full four page spread about the plight of illegal central and south american invaders and how we are not doing enough to make them comfortable. This is not even news anymore. Our liberal Gannett corporation owned newspaper has, for a full decade, been promoting the elimination of our southern border. After the lengthy Sunday morning collective "group sob" the paper will feature at least two other sob stories before this week is out.
I don't expect to have too many fellow mourners here. With fewer readers I know the newspaper business is on its last legs. But I sure miss those newspapers of old that educated our citizenry without an axe to grind, and provided the Sunday reader an entire day of reading material.
I was just startled to realize that there may be more truth printed in those supermarket tabloids than there are in the local newspaper.
Sad. Damned Sad.
Posted by A Modest Scribler at 3:00 AM

Easy to explain. When presenting both sides of an issue (objectivity), that takes more space. When merely advocating (subjectivity), it takes less space. Like you, I've watched the paper become a Cliff Notes version of what I grew up with. Not necessarily a bad thing, considering the dearth of content. This began in 2007 when Obama was the candidate of choice. The MSM had been liberal since the 60's when they opposed the Vietnam war, with their prize being the removal of Nixon. But in 2007, the blatant bias was laid bare. I was driving to Travis AFB when it was reported Obama characterized his own white grandmother (who reared him when his own mother couldn't be bothered) as a "typical white person with all the biases and prejudices of a woman her age". Well, I thought, he's done. Only he wasn't. The media spun it and dropped it. Had John McCain called any black a typical black person, he would have withdrawn the next day. Not BO. For the following 8 years, we watched as the press dropped to their collective knees before this man, even as he violated the Constitution (Canning v. NLRB, 9-0 SC decision holding Obama violated the Constitution) and he tapped their phones and read their e-mail. The election of Trump highlighted that fact as they attempted to revert to being independent, except it comes off as shilling for Dems. Newspaper readership has dropped, even when they say on-line readership is taking the place of paper print. If so, why are papers laying off staff? No, the media is distrusted with being objective truth tellers with good reason. They are open advocates for the left.

And, Randy, let's not forget BO's "ciingijg to guns and bibles" quote, another insult smothered and overexploited by his slobbering media groupies. Re Trump and the media, I believe the pollsters and the media's massive miscalculations on the election outcome will someday be a deep, deep study by historians. The media thought they could toy with Trump, give him lots of air time, boost their ratings with his outrageous rants, then laugh like hyenas as Hillary was crowned. After Trump won they were extremely angry that Trump had used them and played them. So their indignation over Hillary's loss was compounded after they realized they'd been had by Trump...and a whole hell of a lot of closeted Trump voters.,

You need to figure out a way to allow people to give you a "thumbs up" on articles AND comments. Both you and Randy hit the mark. "Thumbs up" to both of you.