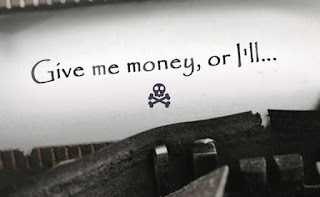 Just watched a black guy on TV. He was pimping his social service organization. Says he identifies as a "social activist".

That provided fodder for thought. These years we have millions of these people who make their living extorting money from others. Be it the most famous community organizer, Barack Hussein Obama, or Al Sharpton, or Jessie Jackson, they all carry with them a set of tools. And in that tool bag are racist accusations for those who don't chip in, or heartless for those who give too little. And like Barry, who never worked a job in his life, these people were bred and succored to become life-long hustlers.

But it's when these "social activists" yank the corporate ball squeezers out that they really score the serious lucre. Corporations are so damned scared of being labelled "racist" they'll contribute millions to even the most fraudulent and wasteful cause if the Barrys, Jacksons and Sharptons will just go away.

And hey, yeah, those TV evangelists beg for money too. But at least they don't ruin your reputation if you choose not to donate.

And then there's the politicians who beg for your money as well. And they generate promises that they'll craft you a better world if they can just have your vote and your money. But they too will go away if you ignore them long enough.

Not the black "social activists" though. They'll pull the race card on you faster than a rabbit's orgasm if you deny them their lucre.

But I'm in a forgiving mood this morning. I'm ready to rate these "social activists" a half grade higher than his/her stay at home peers, watching Jerry Springer and those half a dozen black court shows. At least the "social activists" are hustling to get your money. The stay at homes just wait for the welfare check and food stamp money gets deposited to their checking account.....then laugh like hell at the honkies who are stupid enough to donate to the "47 percent lifestyle".