You Too Can Be A "Social Justice Advocate" 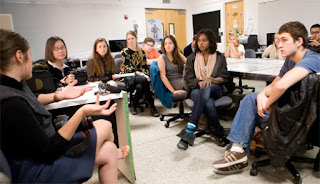 Ah...the madness continues.  Just read that, on American college campuses, where 90% of the faculty are flaming liberals, university wonks have upped their game.  Seems several universities are insuring everyone has a "safe space" by hiring Social Justice Advocates (SJAs).

These Social Justice Advocates are hired from the student populace at large, who are then paid to walk around the dorms and the campus and identify those students who offend anyone, either in speech or body action.  The SJA's then report these offenses to the Administration who will call the offending student in for counseling and appropriate retribution.

Folks, I have to admit that I despair at this.  I guess I'm just getting too old and have lost touch with the social movements of Generations X, Y and Millennials.  When I was in school if someone offended you, you punched them in the nose, kicked em in the nuts, or exercised any number of defensive measures to curb offensive behavior or speech.  But I guess the generations who always got a blue ribbon for participation simply don't know how to defend themselves.

I've said it often and I'll say it again.  This country needs a good ole military draft, with everyone forced to serve a minimum of two years in uniform.  I suspect that when these "snowflake generations" come face to face with an IED, or even a barrack's "blanket party" they'd learn there are worse places than an American college campus.

I hope this is fake news. When I was a kid I beat the crap out of a kid who shot at my cat with a BBgun. in college we became friends and even roommates. things had a way of working themselves out in those days.

Not fake news, Jerry. Not much chance of repeating your childhood experience these days. Folks need their safe spaces.

Hey Scribe, that was when men were men and sheep were nervous. You could also "tap out" or say "uncle" and not have everyone jump in and Jackboot you to death. The Snowflakes of today walk around with their man purses, "fruity" looking stripped socks and man bun haircuts. I think todays Snowflakes idea of a blanket party is a lot different then our idea of a blanket party.