Long Before "A Candle In The Wind" 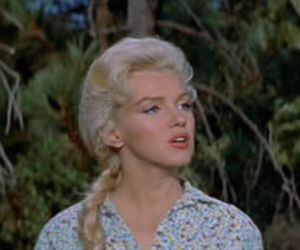 Just saw a news article about Marilyn Monroe's home going on the market. Looked at the pictures of it and was pleased to see the house was still pretty much in the same configuration as when Marilyn lived there. My first thought was how I love the old 50's and 60's simplicity of wood and brick...so much in contrast with the shiny steel, industrialized look of the modern rich man's pad.
My second thought was a remembrance of that day on August 5th, 1962. The Fresno Bee came flying over the fence. I went out and picked it up, unhatched that ancient newspaper fold that was "de rigeur" in those days.. (no rubber band needed), then read the headlines saying Marilyn was dead.
Now, had I reached the stage of "full puberty", my reaction might have been far different. But, since I was fourteen and four months...and the "night dreams" had not yet started, my reaction to Marilyn's death was one of shocked sadness.
I simply could not understand how one so beautiful and famous, undoubtedly wealthy, could take her own life. I had seen Marilyn's face, majestically six feet high, up there on the movie screen over at the Park Theater. And, even as a child, I could detect the delicacy of spirit the woman possessed. I believe that I, and a hundred million other men, were drawn to Marilyn, not so much for her beauty, as by her vulnerability. There seemed to be always an urge to "protect her" from a world she seemed not to be able to understand.
I had seen Marilyn in "How To Marry A Millionaire" and "Gentleman Prefer Blondes"...but, ironically it was the movie with Mitchum, in "River of No Return" that made me fully appreciate her beauty. I didn't believe anyone could look that beautiful in flour sack shirt!
Later, when my balls finally dropped, I would see Marylin in "Some Like It Hot"....that scene when she is bending over the couch, to soothe Tony Curtis's brow, and realized that Marylin could stir more than the heart. That scene is, to this day, one of the most sizzling and erotic movie scenes I've ever witnessed.
But it was on that summer day, August 5th, 1962, the day already heating up, the swamp cooler going there at The Alamo, when I first felt the sweet and innocent sense of loss. Just as so many of us remember the day Kennedy was shot, or that sad day in Memphis, or that sad night at the Ambassador Hotel when Bobby was killed, I remember the day Marylin died as if were yesterday. And I'm not sure what is more sweetly nostalgic....the memory of a day of childhood innocence....or the tragic death of a sex goddess.
"A Candle In The Wind" had not yet been written...but it was certainly written on my heart on that sad day.
Posted by A Modest Scribler at 2:00 AM